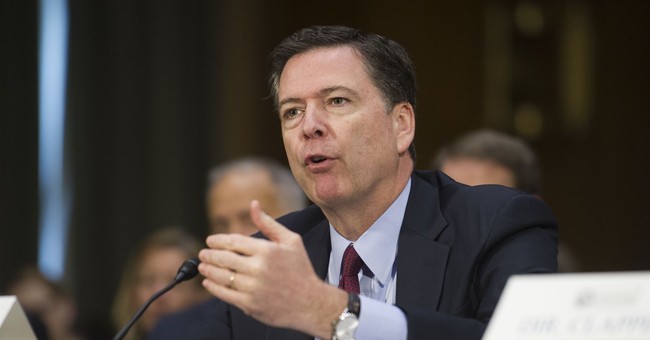 During congressional testimony back in June 2017, fired FBI Director James Comey admitted to leaking potentially classified memos about his conversations with President Trump. Comey said he gave them to a friend, who then gave them to the New York Times.

"I woke up in the middle of the night on Monday night, because it didn't dawn on me originally, that there might be corroboration for our conversations, might be a tape, my judgement was that I needed to get that out into the public square and so I asked a friend of mine to share the content of the memo with a reporter," Comey said at the time. "I didn't do it myself for a variety of reasons, but asked him to, because I thought that it might prompt the appointment of a Special Counsel. I asked a close friend of mine to do that."

It turns out Comey kept those memos at home and when he was fired from his position in May 2017, a number of FBI agents were sent to his house to retrieve them. Government watchdog Judicial Watch dug up the information as part of a Freedom of Information Act lawsuit, which also shows Comey claimed two other memos were "missing."

"Judicial Watch announced today it received six pages of records from the FBI showing that in June, 2017, a month after FBI Director James Comey was fired by President Donald Trump, FBI agents visited his home and collected “as evidence” four memos that allegedly detail conversations he had with President Trump.  One of his memos was written on June 6, a month after he was fired," the group released in a statement Wednesday. "Comey was fired by Trump on May 9, 2017. The memos obtained by Judicial Watch were collected from Comey by the FBI on June 7, a month later, and are dated February 14, 2017; March 30, 2017; April 11, 2017; and one is dated “last night at 6:30 pm."

"The FBI documents also revealed that Comey recalled writing two other memos after conversations with Trump that he claimed were 'missing.'  The FBI visit and interview took place on June 7, the day before Comey admitted leaking the memos in testimony to Congress," the statement continues.

Comey denies any wrongdoing about the handling of the memos.

“These extraordinary FBI docs further confirm that James Comey should never have had FBI files on President Trump at his home and that the FBI failed to secure and protect these private and classified files,” Judicial Watch President Tom Fitton said about the revelations. “Mr. Comey’s illegal leaking these FBI files as part of his vendetta against President Trump (directly resulting in the corrupt appointment of Robert Mueller) ought to be the subject of a criminal investigation.”