The Senate Has Confirmed the Next Secretary of Defense 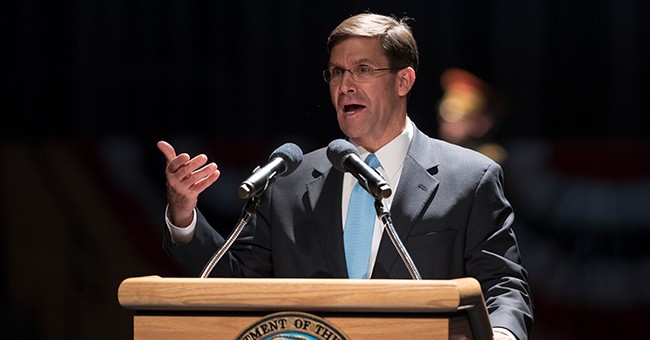 The Senate has confirmed former Army Lt. Col. Mark Esper as the next Secretary of Defense. The vote came down 90-8.  Every Democrat running for president, Senators Cory Booker, Kamala Harris, Amy Klobuchar, Kirsten Gillinbrand and Elizabeth Warren, voted against him.

"If confirmed, I intend to bring the same focus, energy, professionalism, thoughtfulness, and commitment to the Department of Defense that I brought every single dayto my position as Army Secretary," Esper said during his confirmation hearing. "The bottom line is this:in an era of mounting fiscal challenges and competing demands, we mustactively seek ways tofreeup time, money, and manpower to invest back into our top priorities."

"I want to thank the President for this opportunity and for his confidence in me. I am grateful for the time that many of you have spent with me in recent weeks and thankful for the Committee’s swift attention to my nomination," he continued.

Esper will be first Senate-confirmed defense chief since Jim Mattis resigned in December.

Esper is the permanent replacement for former Defense Secretary General James Mattis. Since Mattis retired in December, only acting secretaries held the position, including Esper.