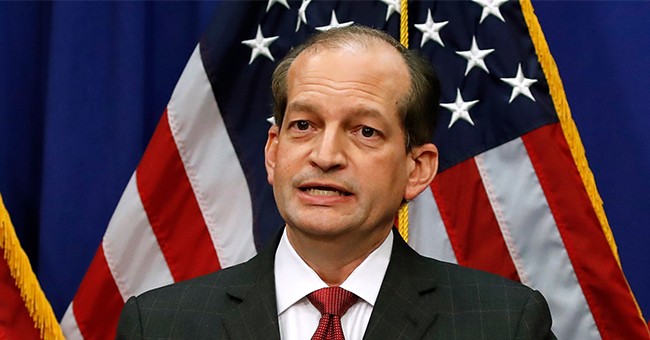 Embattled Labor Secretary Alex Acosta is expected to step down from his position by the end of next week after coming under heavy scrutiny for his handling of a 2008 case against pedophile Jeffery Epstein. At the time, Acosta served as the U.S. Attorney in Florida. Deputy Labor Secretary Patrick Pizzella will take over as acting secretary.

“He's done a fantastic job. He's a friend of everybody in the Administration. And I got a call this morning early form Alex, and I think he did a very good job yesterday under a lot of pressure. He did a fantastic job, and he explained it. He made a deal that people were happy with, and then 12 years later, they're not happy with it. You'll have to figure all of that out but the fact is he has been a fantastic Secretary of Labor," Trump said. "And Alex called me this morning, and he wanted to see me. And I actually said, ‘well, we have the press right out here, so perhaps you just want to say it to the press.’ But I just want to let you know this was him not me because I’m with him. He was a—he’s a tremendous talent. He's a Hispanic man. He went to Harvard, a great student. And in so many ways I just hate what he’s saying now because we're going to miss him.”

“I will say this and I say it again and I say it loud and clear: Alex Acosta was a great Secretary of Labor. What he’s done with plans, and you see the plans coming one after another. You’re just about done with the 401k and that happened," he continued. "Things that nobody would even think of. So it’s very sad, but at the same time, he wants the focus to be on accomplishments, not on what you’re talking about.”

“I do not think it’s right and fair for this administration’s Labor Department to have Epstein as the focus rather than the incredible economy we have today. And so I called the President this morning. I told him that I thought the right thing was to step aside,” Acosta said standing next to the President.

Alex Acosta informed me this morning that he felt the constant drumbeat of press about a prosecution which took place under his watch more than 12 years ago was bad for the Administration, which he so strongly believes in, and he graciously tendered his resignation....

....Alex was a great Secretary of Labor and his service is truly appreciated. He will be replaced on an acting basis by Pat Pizzella, the current Deputy Secretary.

Last week Epstein was arrested by federal law enforcement authorities and charged with a slew of crimes, including sex trafficking of underage girls.

"Jeffrey Epstein was arrested for allegedly sex trafficking dozens of minors in New York and Florida between 2002 and 2005, and will appear in court in New York on Monday, according to three law enforcement sources. Saturday's arrest by the FBI-NYPD Crimes Against Children Task Force comes about 12 years after the 66-year-old financier essentially got a slap on the wrist for allegedly molesting dozens of underage girls in Florida," the Daily Beast reported over the weekend. "For more than a decade, Epstein’s alleged abuse of minors has been the subject of lawsuits brought by victims, investigations by local and federal authorities, and exposés in the press. But despite the attention cast on his alleged sex crimes, the hedge-funder has managed to avoid any meaningful jail time, let alone federal charges."

On Wednesday, Acosta held a press conference to explain why he cut a deal with Epstein ten years ago, arguing a trial and harsher charges against him could have resulted in him walking free.

"I absolutely welcome this New York prosecution, it is absolutely the right thing to do," Acosta said. "We believe that we proceeded appropriately, based on the evidence."

"Without the work of our prosecutors, Epstein would have gotten away," Acosta argued. "The Palm Beach attorney's office was ready to let Epstein walk free."

According to Acosta, obtaining a guilty plea deal from Epstein resulted in jail time and a sex offender registration, which was better than losing at trial. Epstein served 13 months of an 18-month sentence and was allowed to leave jail for work purposes. Despite being standard practice, Epstein's victims weren't notified about the plea deal ahead of time.

Citing a leading prosecutor on the case, Acosta made the argument that the facts at the time could not be proven beyond a reasonable doubt in court due to some victims, young children, refusing to testify and even some witnesses exonerating Epstein.

"There was value in getting a secure guilty plea and to have him register," Acosta said, adding he wanted to help his victims by putting him away. "There is a value to a short guilty plea, because letting him walk...would have been absolutely awful."