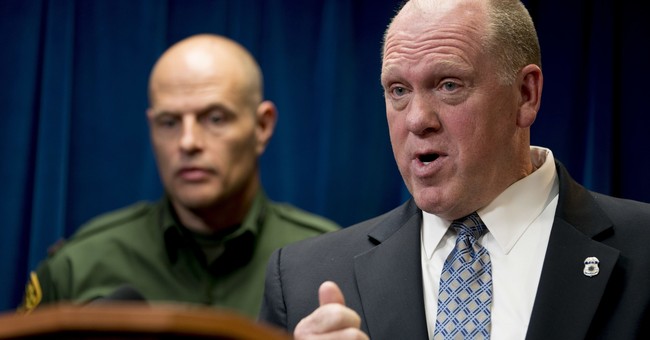 During an interview with Fox and Friends Friday morning, President Trump announced he is re-hiring former Acting Immigration and Customs Enforcement Director Tom Homan to serve as a border czar in the administration.

“Tom Homan’s coming back," Trump said. "He’ll be a border czar. He’ll be reporting directly to me. He’ll be probably working out of the White House. He’s a good man."

"He’s fantastic, tough as you get and smart and he’s doing much of the legal work and we are putting in some great, strong but fair and good people," he continued.

The official announcement on the move was set for next week, but President Trump announced it this morning. Homan is currently a Fox News contributor and his hiring comes as the crisis at the border continues to rage.

Earlier this week, Senate Judiciary Committee Chairman Lindsey Graham held a hearing to go over new legislation that would immediately stem the overwhelming flow from Central America. He also appeared on Fox and Friends Friday morning.

“The reality is that we have an unprecedented humanitarian and security crisis on our border. 144,000 crossings last month. We had one day with 5,800 and then you see large groups like the group of 1,000. That group was made up entirely of people from Central America, Guatemala, Honduras and El Salvador, 900 members of family units, 60 unaccompanied children and just a few single adults. That highlights the crisis right there," McAleenan said. "So these unprecedented numbers mean that there’s unprecedented pressure on the system. Health and Human Services is the department charged with caring for children that come across the border unaccompanied. Their resources have been overwhelmed.”

Over the past week, Mexico has taken measures to bolster their southern border with Guatemala after President Trump threatened to impose tariffs.