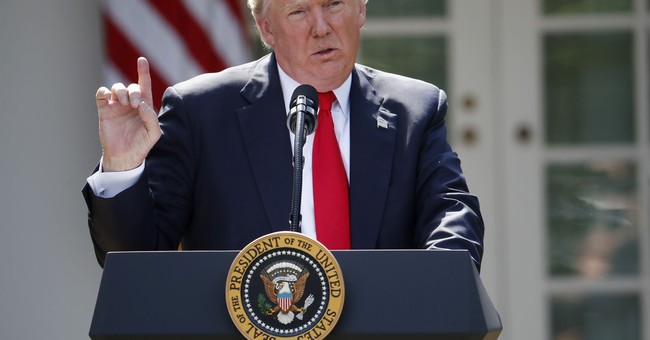 "Our plan includes a sweeping modernization of our dysfunctional legal immigration process," Trump said. "The system will finally be fair, transparent, and promote equality and opportunity for all."

According to a briefing by senior White House officials prior to the speech, the goal of the new system is to treat border security scientifically, rather than as a political issue, in addition to implementing a merit based legal immigration system. Both will be done while maintaining a number of key principles, including protection of American wages, keeping the number of green cards issued per year at one million, attracting and maintaining the best, unifying immediate family, providing labor to critical industries and preserving humanitarian values.

We are here on this beautiful spring day to unveil our plan to create a fair, modern & LAWFUL system of immigration for the U.S. If adopted, our plan will transform America’s immigration system into the pride of our Nation and the envy of the modern world. https://t.co/YqyTYgTByD

The biggest changes come with a merit based legal immigration system, rather than U.S. citizenship through family ties. The merit based system uses points to assess citizenship eligibility by evaluating English proficiency, employment offers, pledges of investment or job creation and educational or vocational certifications.

In order to ensure proper border security infrastruction, without getting caught up in political debates, the White House wants to establish trust fund to best ensure financial resources are properly available.

"To make certain that we are constantly making the upgrades we need, our proposal creates a permanent and self-sustaining border security trust fund." pic.twitter.com/UhUcDsAxNI

During his remarks, President Trump also called for changes in U.S. asylum laws. Currently the asylum backlog sits at 900,000 cases and is being rampantly abused by Central American adults to gain permanent residence in the U.S.

"We must also restore the integrity of our broken asylum system. Our Nation has a proud history of affording protection to those fleeing government persecutions. Unfortunately, legitimate asylum seekers are being displaced by those lodging frivolous claims." pic.twitter.com/7VVuqHhhRc

What I'm trying to do is stop the flow coming from Central America to regain control of our border and stop a humanitarian crisis that I think is just going to get worse over time. One of the most important things I can stress to you is that people are trying to get caught. They're not avoiding getting caught," Graham said. "So when we talk about building a wall as Republicans, that makes sense to stop illegal entry into the country, try to direct people into areas where we have a better chance of apprehending them. That doesn't work when the goal of the person is to find a Border Patrol agent and turn yourself in."