Lindsey Graham Just Introduced New Legislation to Fix the Border Crisis. Here's What it Does. 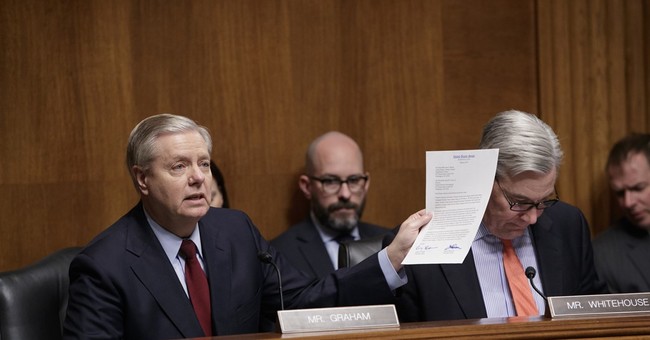 "Today I'm going to introduce legislation designed to deal with the crisis at our border," Graham said. “We have a perfect storm brewing at the border because of a series of broken and outdated laws related to asylum and children.”

"What I'm trying to do is stop the flow coming from Central America to regain control of our border and stop a humanitarian crisis that I think is just going to get worse over time. One of the most important things I can stress to you is that people are trying to get caught. They're not avoiding getting caught," Graham continued. "So when we talk about building a wall as Republicans, that makes sense to stop illegal entry into the country, try to direct people into areas where we have a better chance of apprehending them. That doesn't work when the goal of the person is to find a Border Patrol agent and turn yourself in."

Graham addressed calls from lawmakers to give additional funding to Central American countries, arguing it won't stop the problem. The real problem with the current crisis are the loopholes in U.S. immigration law.

"To those who want to give more money to Central America, it won't stop the problem. They're going to keep coming to the United States...no amount of money is going to stop people from coming," Graham said, noting he's in charge of foreign assistance on the Appropriations Committee. "No matter how high the wall will be built, no matter how many drones you have, no matter how many agents you put at the border, they'll keep coming because they want to get caught."

"No more asylum claims at the U.S. border if you're from Central America," Graham said.

Currently, families and unaccompanied minors can only be held for 20 days. Because of the lengthy processing backlog for asylum seekers, they are released into American communities.

"If you're an unaccompanied minor from Central America, under our law we can only hold you 20 days at DHS, then we turn you over to labor HHS. Ninety-eight percent of the unaccompanied minors who make it to America from Central America never leave the United States. Families know this, word is out on the street in the Northern Triangle countries that if your child can get here by themselves then the chance of them staying in America is almost 100 percent. We are incentivizing a horrible journey," Graham said. "Under our law if you come as a unit, family unit, and you have a minor child, we can only hold the family for 20 days because we don't want to separate the family. We don't have enough detention bed space. We release the entire family after 20 days. So word is out on the street in Central America that if you bring a minor child with you, your chance of getting deported goes to almost zero. Your hearing date is years away and we release you inside the country and that's the goal of coming. This legislation is going to deal with the problem."

More on asylum abuse numbers from the White House:

-On average, out of every 100 aliens subject to expedited removal who claim a fear of persecution, only about 12 will ultimately be granted asylum.
-Around half of all aliens who make a credible fear claim and are subsequently placed in removal proceedings do not actually apply for asylum.
-The number of aliens who do not show up to court and are ordered removed in absentia has soared, with 17,200 removal orders issued in absentia in the first quarter of fiscal year (FY) 2019.

You can watch Graham's remarks below: