"Little Squabble": Here’s Where the White House Stands on Trade Talks With China 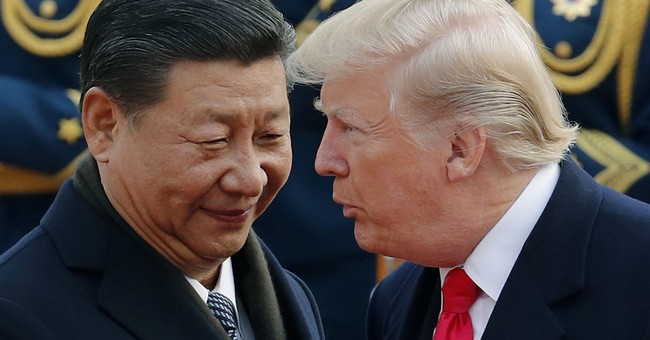 Before boarding Air Force One for an infrastructure focused trip to Louisiana Tuesday afternoon, President Trump spoke with reporters about ongoing trade talks with China.

“We’re having a little squabble with China,” he said. “The relationship I have with President Xi is extraordinary."

"But he’s for China and I’m for the USA. It’s very, very simple,” he continued. “I think it’s going to turn out extremely well we’re in a very strong position."

Ahead of a meeting with Hungarian Prime Minister Viktor Orban Monday, President Trump said a deal with China was "95 percent there," but that the Chinese changed the terms and said the deal was off.

"We take in billions of dollars, it’s a very positive step, I love the position we’re in. There can be some retaliation, but it can’t be very very substantial by comparison. A small portion will go to our farmers, they’ll be very happy, our industries will be very happy," Trump said. "We had a deal, 95 percent was there."

China buys MUCH less from us than we buy from them, by almost 500 Billion Dollars, so we are in a fantastic position. Make your product at home in the USA and there is no Tariff. You can also buy from a non-Tariffed country instead of China. Many companies are leaving China.....

....so that they will be more competitive for USA buyers. We are now a much bigger economy than China, and have substantially increased in size since the great 2016 Election. We are the “piggy bank” that everyone wants to raid and take advantage of. NO MORE!

We can make a deal with China tomorrow, before their companies start leaving so as not to lose USA business, but the last time we were close they wanted to renegotiate the deal. No way! We are in a much better position now than any deal we could have made. Will be taking in.....

When the time is right we will make a deal with China. My respect and friendship with President Xi is unlimited but, as I have told him many times before, this must be a great deal for the United States or it just doesn’t make any sense. We have to be allowed to make up some.....

....of the tremendous ground we have lost to China on Trade since the ridiculous one sided formation of the WTO. It will all happen, and much faster than people think!

Our great Patriot Farmers will be one of the biggest beneficiaries of what is happening now. Hopefully China will do us the honor of continuing to buy our great farm product, the best, but if not your Country will be making up the difference based on a very high China buy......

....This money will come from the massive Tariffs being paid to the United States for allowing China, and others, to do business with us. The Farmers have been “forgotten” for many years. Their time is now!

China will be pumping money into their system and probably reducing interest rates, as always, in order to make up for the business they are, and will be, losing. If the Federal Reserve ever did a “match,” it would be game over, we win! In any event, China wants a deal!

Over the weekend, White House economic advisor Larry Kudlow talked about the cost of the current "squabble" for Americans.

Meanwhile, President Trump says the dialogue will continue and he will meet with President Xi at the G20. .

"We had a deal that was very close and then they broke it,” he said.