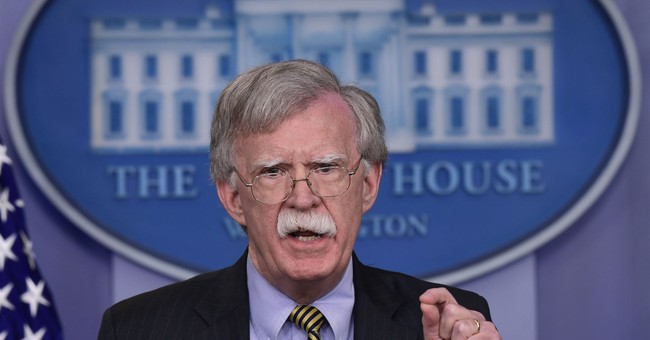 “In response to a number of troubling and escalatory indications and warnings, the United States is deploying the USS Abraham Lincoln Carrier Strike Group and a bomber task force to the U.S. Central Command region to send a clear and unmistakable message to the Iranian regime that any attack on United States interests or on those of our allies will be met with unrelenting force,” Bolton said.

“The United States is not seeking war with the Iranian regime, but we are fully prepared to respond to any attack, whether by proxy, the Islamic Revolutionary Guard Corps, or regular Iranian forces,” he continued.

The specific acts by Iran that Bolton referred to are unclear.

Over the weekend, terrorist group Hamas launched over 600 rockets into Israel with a goal of murdering civilians. Three people were killed. Israeli Defense Forces retaliated by targeting a Hamas leader known for transferring money from Iran to terrorists in Gaza.

Transferring Iranian money to Hamas & the PIJ doesn’t make you a businessman. It makes you a terrorist. pic.twitter.com/WvGEB16r4h

"The Iranian regime is the leading state sponsor of terror.  It exports dangerous missiles, fuels conflicts across the Middle East, and supports terrorist proxies,” President Donald Trump released in a statement. "Today, I am formally announcing my Administration’s plan to designate Iran’s Islamic Revolutionary Guard Corps (IRGC), including its Qods Force, as a Foreign Terrorist Organization (FTO) under Section 219 of the Immigration and Nationality Act.  This unprecedented step, led by the Department of State, recognizes the reality that Iran is not only a State Sponsor of Terrorism, but that the IRGC actively participates in, finances, and promotes terrorism as a tool of statecraft.  The IRGC is the Iranian government’s primary means of directing and implementing its global terrorist campaign."