What? Biden's Spokesperson Blames 'Right Wingers' for Sexual Allegations Made by a Democrat 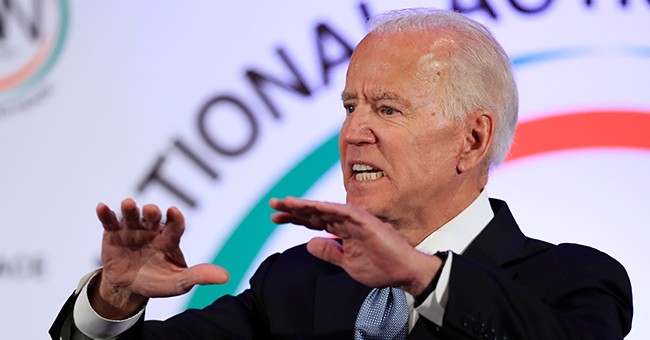 Former Vice President Joe Biden is expected to announce a run for the White House any day now as the Democrat primary field continues to grow.

But late last week, former Nevada assemblywoman Lucy Flores published an essay in The Cut and detailed how she says Biden inappropriately touched her during a campaign event in 2014.

"I felt him get closer to me from behind. He leaned further in and inhaled my hair. I was mortified. I thought to myself, “I didn’t wash my hair today and the vice-president of the United States is smelling it. And also, what in the actual fuck? Why is the vice-president of the United States smelling my hair?” He proceeded to plant a big slow kiss on the back of my head. My brain couldn’t process what was happening. I was embarrassed. I was shocked. I was confused," she wrote.

Flores is a Democrat and went on CNN Sunday to further explain.

Flores' accusations prompted many recollections of Biden acting inappropriately. Fellow Democrats already on the 2020 campaign trail have been asked about the Flores incident and others during media interviews.

On Monday morning, Biden spokesperson Bill Russo blamed the allegations on Republicans, despite a Democrat bringing the accusation forward that prompted recollections of the former Vice President's infamously roving hands.

"These smears and forgeries have existed in the dark recesses of the Internet for a while. And to this day, right wing trolls and others continue to exploit them for their own gain,” Russo said.

On Sunday, prior to Russo's statement, Biden spoke for himself.

“I may not recall these moments the same way, and I may be surprised at what I hear. But we have arrived at an important time when women feel they can and should relate their experiences, and men should pay attention. And I will,” Biden said.