Historic Justice: Trump and Netanyahu Make the Golan Offical at the White House 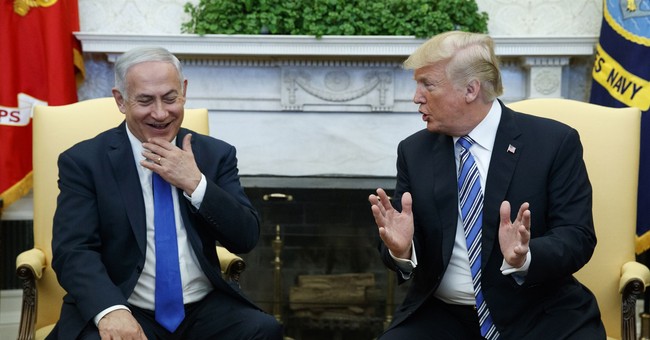 Israeli Prime Minister Benjamin Netanyahu made a visit to the White House Monday afternoon for a meeting with President Donald Trump.

Before heading into the Oval Office, both leaders participated in a signing ceremony to officially recognize the Golan Heights as Israeli territory.

“Today I am taking historic action to promote Israel’s ability to defend itself and really to have a very powerful, very strong national security, which they're entitled to have. In a moment, I will sign a presidential proclamation recognizing Israel’s sovereign right over the Golan Heights," Trump said.  “Today, aggressive action by Iran and terrorist groups in southern Syria, including Hezbollah, continued to make the Golan Heights a potential launching ground for attacks against Israel. Very violent attacks.”

Today, it was my great honor to welcome Prime Minister @Netanyahu of Israel back to the @WhiteHouse where I signed a Presidential Proclamation recognizing Israel’s sovereignty over the Golan Heights. Read more: https://t.co/yAAyR2Hxe4 pic.twitter.com/gWp6nwRwsY

Netanyahu thanked the President for his support of the country and called the move "historic justice."

"Mr. President, my dear friend Donald. You have shown consistently incredible support for Israel, for our right to self-defense. When we exercise that self-defense, you’ve never flinched. You’ve always been there, including today and I thank you," Netanyahu said. “Mr. President, your decision to recognize Israel’s sovereignty on the Golan Heights is so historic. Your recognition is a twofold act of historic justice.”

My friend President Trump signed an order recognizing Israeli sovereignty in the Golan Heights. A historic day for Israel! pic.twitter.com/dVAadIDxTH

Netanyahu was scheduled to speak at AIPAC Tuesday, but a Hamas terrorist attack in Israel cut his trip to Washington short.