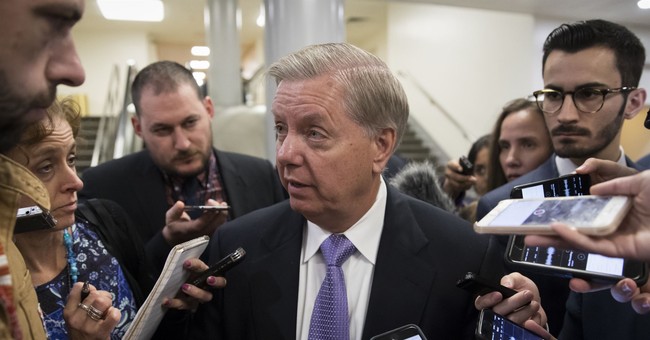 Speaking from the White House Wednesday afternoon before a meeting with Colombian President Ivan Duque, President Trump said he is going through the current border security bill offered by Congress and "looking for landmines." He has not revealed whether or not he plans to sign it before the government partially shuts down on Friday night.

"We’ll take a very serious look at it [the deal]. We have a lot of things happening right now. We’re building a lot of wall, right now with money that we already have. When people see what we’re doing, I think they’ll be very surprised. We’re doing a lot of work. And we have planned to do a lot of work. But I have not seen it yet. I appreciate all the work the Republicans are doing because they’re really going against a radical left. It’s a radical left. And they’re going against it very hard and they’re fighting. But we’re in very good shape and we’re going to take a look at it when it comes," Trump said in the Oval Office. “I don’t want to see a shutdown. A shutdown would be a terrible thing. I think a point was made with the last shutdown; people realized how bad the border is, how unsafe the border is. I think a lot of good points were made, but I don’t want to see another one—there’s no reason for it. We’re going to look at the legislation when it comes and I’ll make a determination then.”

But according to Senate Judiciary Committee Chairman Lindsey Graham, President Trump is likely to sign the deal while keeping a national emergency declaration as an option.

Sen. Lindsey Graham says he spoke last night with Pres. Trump, who is "inclined to accept the agreement and move on and try to find money elsewhere" to fund his border wall.

"I think the national emergency declaration is definitely on the table." https://t.co/tXMGEZzT6Z pic.twitter.com/97MCRPTgeh

Senate Majority Leader Mitch McConnell seems confident President Trump will sign the deal and that it's sufficient given the split government in Washington.

Meanwhile, Democrats are already threatening to rebuke President Trump if he tries to find alternative ways to fund a border wall, either by moving previously allocated funding around or through a national emergency.

"If the president goes over and overrides the appropriation processes, overrides the authority of Congress by moving significant amounts of money from one program to another, there is a thing called we’ll see you tomorrow, Mr. President. You’re going to have to come back here for all of your programs for everything,” Democrat Congressman John Garamendi told CNN Wednesday. “The coast guard provides a wall 1500 miles at sea. Now could the president take that money? He could. But I’ll guarantee you there would be tomorrow and when tomorrow comes the president would pay a heavy price in other things he might think are important.”