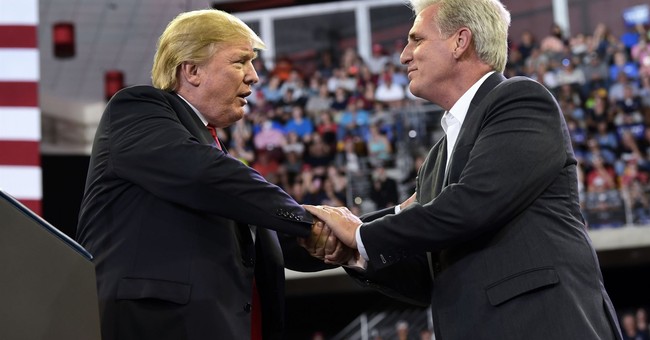 Last week Jordan, a member of the Freedom Caucus, announced he would run against McCarthy for the position.

NEWS: @realDonaldTrump? is trying to play peacemaker btw ?@GOPLeader? & ?@Jim_Jordan?, asking them to cut a deal of some sort. Has lit up the rumor mill that Trump is pushing Jordan to be his top Judiciary defender, the position Jordan wants https://t.co/2VKm1I7tdZ

With McCarthy's win, Jordan is reportedly in line to be the ranking member of the House Judiciary Committee.

NEW: Trump has nudged Kevin McCarthy to make JIM JORDAN the top Republican in the Judiciary Committee — which would put Trump’s fiercest loyalist in position to defend him against investigations and impeachment.https://t.co/VMyDNDqp8U

In the wake of Democrat control, McCarthy is being praised for his pro-life principles.

“Congressman Kevin McCarthy is a great friend to the pro-life movement and we congratulate him on his election to serve as House Minority Leader,” Susan B. Anthony List President Marjorie Dannenfelser released in a statement. “Congressman McCarthy is one of the foremost champions of ‘Micah’s Law,’ compassionate, popular legislation to stop painful late-term abortions after five months of pregnancy, which passed with overwhelming support in the House last year under his leadership. Having a strong pro-life ally like McCarthy in this key position will be important to safeguarding pro-life policies that will come under attack by pro-abortion House Democrats who seek abortion on demand, funded by the taxpayers. We congratulate Leader McCarthy and look forward to continuing to work together to advance the pro-life cause in the U.S. House.”