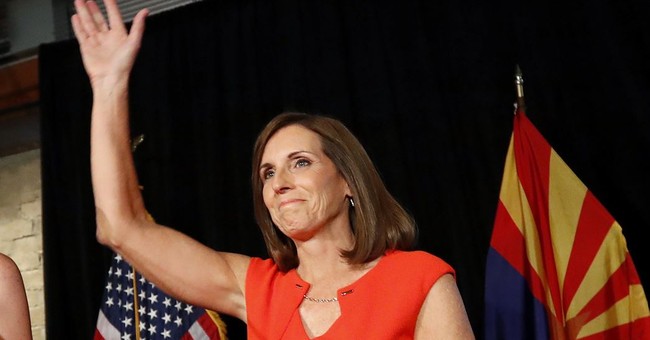 We're just days away from the 2018 midterm elections and races around the country are coming down to the wire.

In Arizona, Republican Congresswoman Martha McSally has been battling far left activist and Democrat Congresswoman Kysten Sinema. For months, polling has been tight with Sinema slightly ahead. With just days left before voters make their final decision, new polling shows McSally has the edge.

From OH Predictive Insights and ABC15 Arizona (bolding is mine):

Since our last poll, McSally has increased to a seven-point lead over Sinema, with 52% of the vote. Sinema holds 45% of the vote, with only 2% left undecided and 1% for Green candidate Angela Green.

When looking at favorability, McSally is more highly favored with 54% of the vote, again putting her seven points above Sinema. Sinema is found unfavorable by 50% of voters, compared to McSally’s 44%.

Among Independents over 55 years old, Sinema leads by seven points, with 53% compared to McSally’s 46%. Younger Independents are breaking more for McSally, giving her a 38-point lead of 68%, compared to Sinema's 30%.

Throughout the state, voters have higher levels of support for McSally. In Maricopa County, containing the largest amount of voters in the state, McSally and Sinema are tied with 49% each. McSally leads in both Pima County and rural areas, with 53% and 59% respectively. Sinema trails with 46% in Pima County and 35% in rural areas.

OHPI also broke down voting trends, being so close to Election Day. Among those who have already voted, Sinema and McSally are tied at 49% each. For those with an absentee ballot that they have not yet returned, McSally is winning at 52%, with Sinema at 44%. For those who plan to vote at the polls on Election Day, McSally has a commanding 64-29% lead.

“With the hottest race in the country coming to an end, McSally is solidifying her lead over Sinema,” says Chief Pollster and Managing Partner Mike Noble. “The game-changer comes from Independent voters, who have swung from Sinema to McSally since our last poll. We’ll know come Election Night whether they stick with McSally or swing back to Sinema.”

President Trump was in Arizona last week rallying for McSally and Vice President Mike Pence did the same over the weekend.