President Trump and First Lady Melania Will Travel to Pittsburgh, Pay Respects to Victims and Families 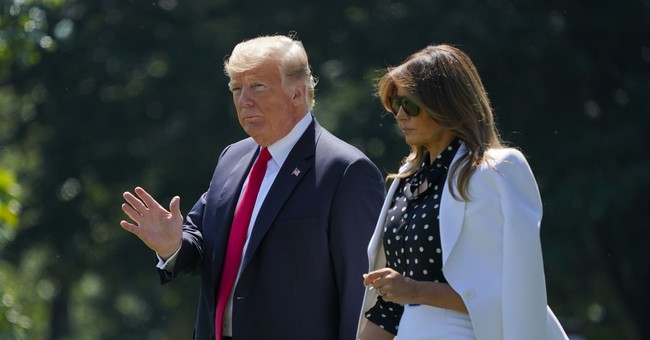 President Donald Trump and First Lady Melania Trump will visit Pittsburgh, Pennsylvania Tuesday. They will pay their respects to those who were murdered at Tree of Life synagogue on Saturday.

"The American people reject hatred, bigotry, prejudice and violence. We are a nation that believes in religious liberty, tolerance and respect,” Press Secretary Sarah Sanders said Monday at the White House, choking back tears. “Tomorrow the president and first lady will travel to Pennsylvania to express the support of the American people and grieve with the Pittsburgh community.”

.@PressSec Sarah Sanders delivers a statement on the tragic shooting in Pittsburgh: pic.twitter.com/irgIMJ7bXt

Flags at the White House have been lowered to half-staff in honor of the victims.

The American flag is flying at half-staff above the White House as our Nation grieves the victims of the shooting at Tree of Life Synagogue in Pittsburgh. pic.twitter.com/BioWCe1a0c

All of America is in mourning over the mass murder of Jewish Americans at the Tree of Life Synagogue in Pittsburgh. We pray for those who perished and their loved ones, and our hearts go out to the brave police officers who sustained serious injuries...

...This evil Anti-Semitic attack is an assault on humanity. It will take all of us working together to extract the poison of Anti-Semitism from our world. We must unite to conquer hate.

Meanwhile, the Department of Justice is weighing the death penalty for the man who killed 11 people while they prayed on Shabbat. He has been charged with 29-federal counts of hate crimes, murder and other charges.

"The tragic attack at the Pittsburgh Tree of Life synagogue two days ago serves as a stark reminder of the need to protect all Americans against hate crimes. In mourning the victims today, we also commit ourselves to preventing future attacks. As President Donald Trump said in condemning the crime, “there must be no tolerance for anti-Semitism in America," Assistant Attorney General Rod Rosenstein said during a law enforcement round table Monday. "Within a few hours of the tragedy on Saturday, Attorney General Jeff Sessions announced the filing of federal criminal charges. He reiterated that '[h]atred and violence on the basis of religion can have no place in our society.'"