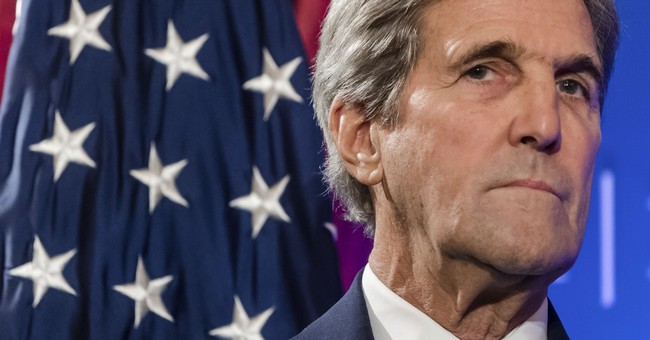 Last week former Secretary of State John Kerry admitted to meeting with Iranian officials a number of times and did not deny accusations he was trying to undermine President Trump's policies toward the terror-sponsoring regime.

.@SecPompeo: "What Secretary Kerry has done is unseemly and unprecedented." He also says: "Secretary Kerry ought not to engage in that kind of behavior."

Now, Republican Senator Marco Rubio is calling on the Department of Justice to investigate.

"I write to encourage the Department of Justice to make a determination on whether former Secretary of State John F. Kerry's actions since leaving office related to the Iran nuclear deal (known formally as the Joint Comprehensive Plan of Action of JPCOA) potentially violate the Logan Act (18 U.S.C. 953) or the Foreign Agent Registration Act (22 U.S.C. 611 et seq.)," Rubio wrote in a letter to Attorney General Jeff Sessions Tuesday. "As you know, the Islamic Republic of Iran remains a U.S.-designated state sponsor of terrorism, and the State Department continues to characterize the regime in Tehran as 'the foremost biggest state sponsor of terrorism' in its annual reports on international terror."

"As you know, the Logan Act is a statue that imposes consequences against any I.S. citizen who, 'without authority of the United States, directly or indirectly commences or carries on any correspondence or intercourse with any foreign government or any officer or agent thereof with intent to influence the measures or conduct of any foreign government or of any officer or agent thereof, in relation to any disputes or controversies with the United States, or to defeat the measures of the United States,'" the letter continues.

In the meantime, Kerry is on a book tour.

Mr. President, you should be more worried about Paul Manafort meeting with Robert Mueller than me meeting with Iran's FM. But if you want to learn something about the nuclear agreement that made the world safer, buy my new book, Every Day Is Extra: https://t.co/DKjc33Kvvu https://t.co/cesltkt0zW