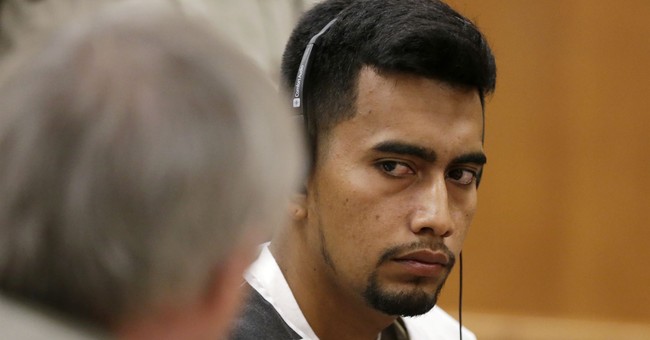 Yesterday the attorney for Cristhian Bahena Rivera, the illegal alien accused of murdering Iowa college student Mollie Tibbetts, claimed during a court appearance his client was in the country legally and that he had been unfairly targeted by President Trump.

The government is incorrectly promoting the idea that Rivera is not in Iowa legally, attorney Allen Richards of Tama said in a court document asking for a gag order in the case.

"Sad and sorry Trump has weighed in on this matter in national media which will poison the entire possible pool of jury members," Richards wrote, referencing a statement from the president citing Tibbetts' death as an example why "immigration laws are such a disgrace."

Rivera has lived in Iowa for four to seven years, working at Yarrabee Farms, a Brooklyn-area farm owned by Eric Lang, the brother of Craig Lang, a prominent Republican.

Craig Lang has verified that Rivera is in Iowa legally, according to Richards’ motion.

But according to federal immigration officials, Rivera is in the country illegally. This fact was reconfirmed yesterday after Rivera's attorney made his false statement in court.

USCIS spokesman Michael Bars:
"A search of records by USCIS revealed Rivera did not make any DACA requests nor were any grants given. We have found no record in our systems indicating he has any immigration status." #MollieTibbetts

As Matt wrote earlier, Rivera's employer also pushed back, saying he used false information to illegally obtain a job on a local farm.

Rivera's attorney lied to the court as the cameras were rolling and chose to bring politics into the case with hopes of helping his illegal alien client.