UPDATE: Feds Have No Records of Legal Status; Lawyer For Man Charged With Mollie Tibbett’s Murder Argues He's in the Country Legally 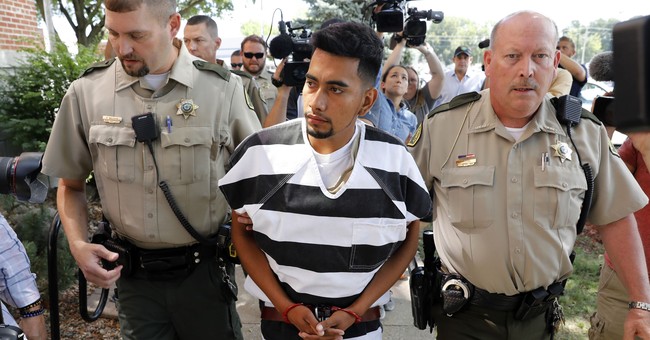 UPDATE: Federal immigration authorities have no records of Rivera entering the country legally.

Immigration authorities say they have no record of granting admission into the United States to the man suspected of killing an Iowa college student.

A spokesman for U.S. Citizenship and Immigration Services said Wednesday that a search of the agency's records found nothing indicating that Cristhian Bahena Rivera "has any immigration status."

That potentially contradicts the statement of Rivera's attorney that he "has the legal documents" to work in the United States.

The lawyer for Cristihian Bahena Rivera, the Mexican man accused of killing 20-year-old Iowa student Mollie Tibbetts, argues he is in the country legally for work. From the Des Moines Register:

The government is incorrectly promoting the idea that Rivera is not in Iowa legally, attorney Allen Richards of Tama said in a court document asking for a gag order in the case.

"Sad and sorry Trump has weighed in on this matter in national media which will poison the entire possible pool of jury members," Richards wrote, referencing a statement from the president citing Tibbetts' death as an example why "immigration laws are such a disgrace."

Rivera has lived in Iowa for four to seven years, working at Yarrabee Farms, a Brooklyn-area farm owned by Eric Lang, the brother of Craig Lang, a prominent Republican.

Craig Lang has verified that Rivera is in Iowa legally, according to Richards’ motion.

The lawyer didn’t provide any immigration documention to prove his client is in the country legally.

According to another report from Fox News, Rivera was able to pass through the E-Verify system by allegedly using a stolen identity:

The Mexican national accused of murdering college student Mollie Tibbetts in Iowa last month lived in the United States illegally for several years -- but was reportedly still able to pass a government system designed to weed out illegal immigrants from obtaining American jobs by using a stolen ID.

Rivera's employer, Yarrabee Farms, confirmed Tuesday that Rivera worked at the farm for four years and said Rivera passed the federal E-Verify check, which is intended to maintain a database of I-9 forms and tax records of employees across the country.

A law enforcement official told the Washington Post that Rivera used a stolen ID to thwart the E-Verify check conducted by Yarrabee Farms – which experts told Fox News is one way to show that the system is not foolproof.

On Tuesday, local law enforcement authorities declared Rivera is an illegal alien and revealed he has been living in the country for up to seven years unlawfully.

Charges were filed in Poweshiek County District court today. Investigators can
confirm Mr. Rivera is an "illegal alien" for 4-7 years.

Rivera was arraigned in court for the first time Wednesday afternoon and listened to instructions from the judge through an interpreter. Immigration and Customs Enforcement has issued a retainer for Rivera, which indicates he is in the country illegally.