Secretary of State Mike Pompeo Bulldozes Another Narrative About Russia 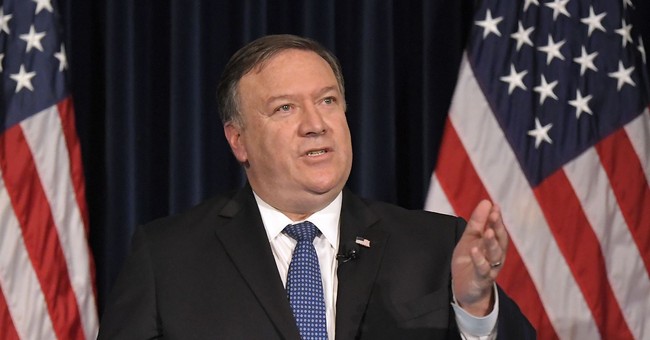 After months of speculation President Trump would recognize Russia's annexation of Crimea as legitimate, Secretary of State Mike Pompeo bulldozed that narrative during testimony in front of the Senate Foreign Relations Committee Wednesday afternoon.

"On the subject of Russia, I want to bring something to your attention right off the bat today. Today the Trump administration is releasing what we're calling the Crimea Declaration," Pompeo said.

"I want to show this committee that the United States does not, and will not recognize the Kremlin's annexation of Crimea," Pompeo continued. "There will be no relief of Crimea-related sanctions until Russia returns control of the Crimean peninsula to Ukraine.”

.@SecPompeo on Crimea Declaration: "I want to show this committee that the United States does not, and will not recognize the Kremlin's annexation of Crimea." https://t.co/Z05OxxfCZu pic.twitter.com/Vh2OhZbvKm

Pompeo also said NATO is an "indispensable" part of U.S. national defense and that President Trump's demand members pay their fair share will only bolster the alliance against Russia.

Pompeo testified about a number of issues and said negotiations with North Korea, despite progress until now, have a long way to go.

"We are engaged in patient diplomacy, but we will not let this drag on to no end," Pompeo said.

.@SecPompeo on North Korea: "I will concede, there is an awful long way to go." pic.twitter.com/92RLLD48AP

Meanwhile, a second meeting between President Trump and Russian President Vladimir Putin has been pushed off until next year.