The Fraudulent Parent Problem on the Border 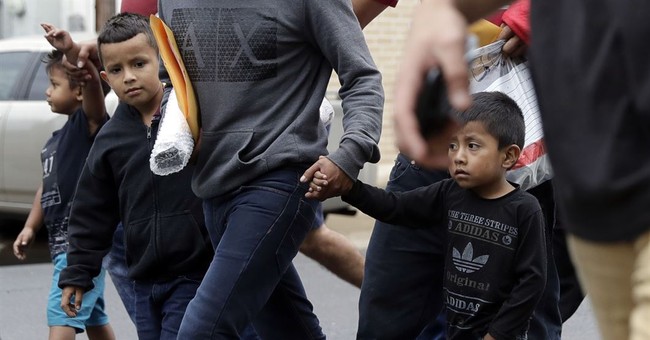 President Trump signed an executive order this week allowing adults who illegally enter the United States with children, claiming to be family units, to be detained together in federal facilities.

The question of a valid parental-child relationship is at the center of how the Department of Homeland Security and Health and Human Services handle detainment. Because of fraudulent documentation, profits to smugglers, and false asylum claims, there is essentially no way to prove or verify adults traveling with children are indeed their parents.

In April 2016, Senate Judiciary Committee Chairman Chuck Grassley warned about catch-and-release policies enabling the smuggling industry.  In the past, any non-Mexican or Canadian individual illegally crossing the border with a child was considered a family unit, processed and released into the interior. Current zero-tolerance policies require they be detained until prosecution.

“A recent Department of Homeland Security (DHS) report confirmed that human smuggling rings are exploiting children in order to prevent the detention of the undocumented immigrants they’re smuggling into the United States. They are pairing children with unrelated adults, knowing adults who enter the United States with children won’t be detained,” he said.

Fast-forward to 2018 and this is still the case.

“If there's no documentation to confirm the claimed relationship between an adult and a child, we [separate] if the parent is a national security, public or safety risk, including when there are criminal charges at issue and it may not be appropriate to maintain the family in detention together,” DHS Secretary Kirstjen Nielsen said at the White House Monday.

Current and former Border Patrol and ICE agents who have worked extensively on human trafficking cases continue to have these concerns. Worse, they’re alarmed the majority of current media coverage is downplaying the smuggling angle.

Smugglers are hired for as much as $20,000 per person and pair unrelated adults to unrelated children. The entire purpose is to claim asylum, valid or not, with the understanding that “family units” are apprehended and then released to the interior of the United States. Since 2008, asylum claims have ballooned by 1,700 percent according to DHS data.

Under the Obama administration, 80-90 percent of individuals making asylum claims with children were released after being processed and given a court date. Inevitably, they started living in the U.S. illegally for years to come. This is the policy the Trump administration is trying to change.

"When they're presenting themselves they'd get an asylum interview and they'd get released,” Piccolo said. "It was widely known that the human smuggling cell knew that aliens coming in from South America stated that they were told if they were a family unit they would be released at the border.”

Piccolo suggests a joint effort with USCIS, DHS and FBI is necessary for vetting and that a joint task force must be developed to do interviews and interrogations of adults traveling with children.

“If you really want to fix this problem you have to really vet these adults,” he said.

Editor's note: A previous version of this story read, "disrupt or destroy." The proper terms, which have been updated, are "disrupt or dismantle."