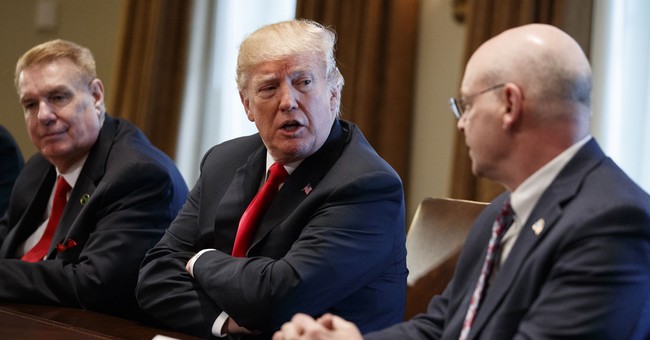 Speaking from the White House Thursday afternoon, President Trump confirmed he will sign new tariffs on imports of steel and aluminum into the United States. Steel will be taxed at 25 percent and aluminum at 10 percent.

"It'll be for a long period of time," Trump said during a listening session with steel and aluminum company CEOs. "We'll be signing it next week. And you'll have protection for a long time in a while. You'll have to regrow your industries, that's all I'm asking."

Trump has long lamented China's "dumping" of cheap steel into the United States, which he argues has destroyed America's industry.

“It destroys our companies and our jobs. People have no idea how badly our country has been mistreated. We’re bringing it all back,” Trump said.

"We are not protectionists, we want a level playing field," U.S. Steel Corporation's Dave Burritt said during the meeting.

"Pretty much all of you will be immediately expanding if we give you that level playing fild. What's been allowed to go on for decades is disgraceful," Trump responded.

Pres said he doesn't blame China for dumping steel and aluminum in the US. He says previous Administrations let it happen. But tells US execs: "you'll have protection for the first time in a long time." pic.twitter.com/0bdNDX8Duc

Here is list of attendees, courtesy of the White House:

Why the Masked and the Unmasked Have Disdain for Each Other
Townhall
Gov. DeSantis slams the Biden administration over the FDA's new edict on monoclonal antibodies
Twitchy
Peter Doocy Has Appropriate Response to Biden Attack as Other ‘Reporters’ Show True Colors
Redstate
The Morning Briefing: GOP Dreams of Election Victory Revenge-Porn Are a Bit Premature
PJ Media