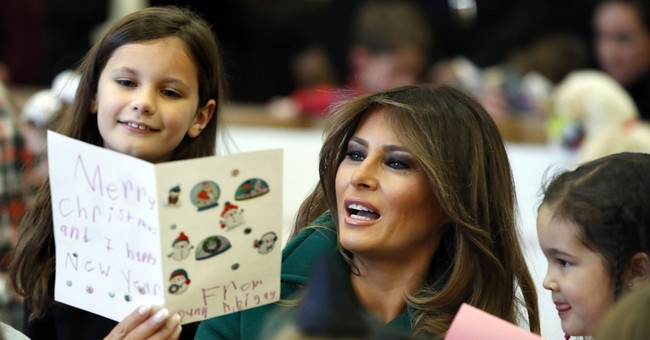 It's Christmas eve and children around the world are anxiously waiting for the arrival of Santa Claus and his reindeer.

President Trump and First Lady Melania, who are spending their Christmas at Mar-a-Lago in Florida, are also excited about his visit and made phones calls to children Sunday afternoon to track his progress through the North American Aerospace Defense Command [NORAD].

“What would you like more than anything?” President Trump asked a child named Casper from Virginia. “Building blocks, that’s what I’ve always liked too. I always loved building blocks. Well I predict Santa will bring you building blocks, so many you won’t be able to use them all.”

“How are you? Merry Christmas. Are you tracking Santa? Do you know where he is right now?” First Lady Melania asked another. “As soon as you go to sleep, Santa will be there.”

“So you want your grandma to get out of the hospital? That’s what your wish is? That’s great. That’s better than asking for some toy or something, that’s much better, right?” the president asked another boy named Brian. “Your grandma’s gonna be good,okay, she’s gonna be good.”

In total, they spoke to 22 children from states across the country.

@POTUS and I had fun helping children track #Santa tonight. Wishing everyone a wonderful #ChristmasEve ?? pic.twitter.com/vzsRfNlrx3

You can track Santa's progress by visiting NoradSanta.org. Merry Christmas.

Santa is getting ready to launch! Good thing the folks @NoradSanta know just where he is. ?? pic.twitter.com/K3Ur9WUU4V