Haley Hammers the UN: America Doesn't Pay for the Privilege of Being Disrespected 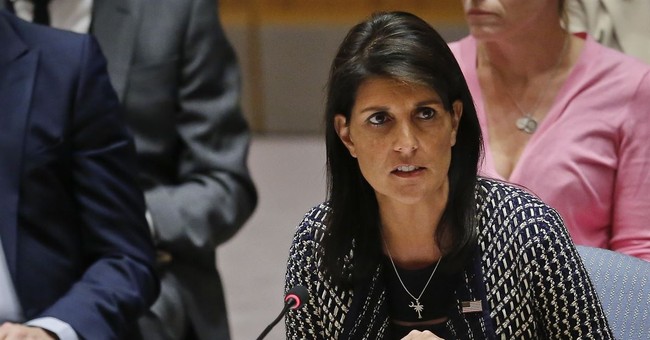 UN Ambassador Nikki Haley did not mince words in front of the UN General Assembly in New York City Thursday morning and reminded the international body that the United States doesn't pay dues to be insulted or disrespected.

"We'll be honest with you: when we make generous contributions to the UN, we also have a legitimate expectation that our goodwill is recognize and respected," she continued.

Her strong statements come just ahead of an emergency UN vote condemning President Trump's recent decision to officially move the U.S. embassy in Tel Aviv to Jerusalem, recognizing the city as the capitol of Israel.

"The decision does nothing to harm peace efforts. Rather President Trump's decision reflects the will of the American people and our right as a nation to choose the location of our embassy. There is no need to describe it further," Haley said. "The decision was in accordance to U.S. law dating back to 1995."

Ahead of the vote yesterday, Haley warned the UN the she will be taking names and will remember which countries choose to vote against the United States. President Trump also slammed the organization during a cabinet meeting at the White House.

Referencing tomorrow's UN vote criticizing the US embassy move. In the words of the President, "Let them vote against us, we'll save a lot." pic.twitter.com/eUGWD4cCBR

The U.S. contributes $8 billion to the UN each year, which amounts to more than 193 countries combined.