It's Official: America Has a New Homeland Security Secretary 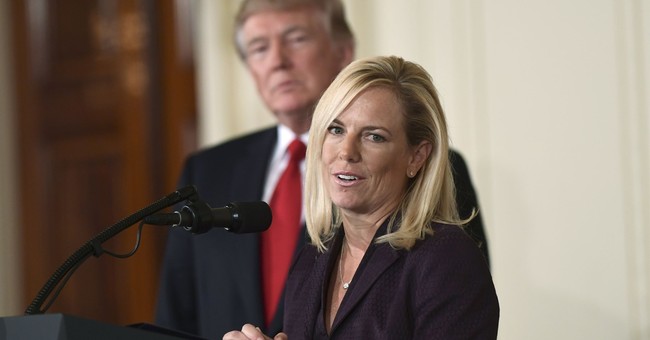 The Department of Homeland Security officially has a new leader: Secretary Kirstjen Nielsen.

"We're going to get the wall. If we don't get the wall, we'll have a lot of unhappy people including me," President Trump said during Nielsen's swearing-in ceremony at the White House Friday.

Earlier: Ceremonial swearing-in of Kirstjen Nielsen to be next Homeland Security Secretary. pic.twitter.com/1rSKbhInr0

Nielsen served as a senior aide for White House Chief of Staff John Kelly before being tapped to run DHS. She worked in the Department under President George W. Bush and for Kelly when he served as secretary. She is the sixth DHS secretary and the second woman to hold the position.

"Our nation is facing a complex threat landscape that is constantly evolving. The threats we face are too many and too varied for any one entity to address them successfully alone. I understand the risks and the resulting challenges the Department is tasked with resolving and I am eager to get to work with all of DHS’ partners – domestic and international from all sectors- to find solutions. From my experience at TSA in the early 2000s, to my time in the private sector supporting the homeland security enterprise, I have gained a vast understanding of the Department, its components, and the many challenges it faces," Nielsen said during her confirmation hearing.

"If confirmed I pledge to continue the record of exceptional leadership that General Kelly and Acting Secretary Duke have established at DHS. I vow to the men and women of DHS, to you, and to the hundreds of millions of Americans who rely on DHS every day, to work tirelessly to effectively execute each mission at the Department of Homeland Security," she continued. "I will work every day to enforce our laws; secure our borders, coasts, and waterways; and protect Americans from dangerous criminals, terrorists, cyberattacks, and the other threats facing our homeland. I also pledge to work every day to give the dedicated men and women of the Department the support, tools and resources they need, and deserve, to carry out their difficult- and often dangerous- missions."

Honored and humbled to take the oath of office to protect and secure our homeland as the sixth Secretary of @DHSgov pic.twitter.com/0KKzzQEEGM