Katie Couric: Matt Lauer's Most Annoying Habit is That He Pinches Me on the A** 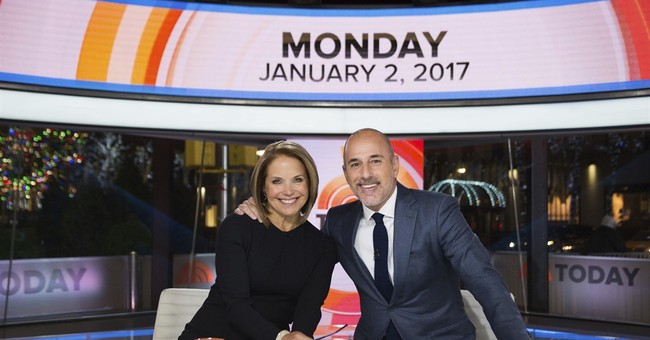 By now you know Today Show superstar Matt Lauer has been fired, allegedly for repeated sexual harassment and assault against his female colleagues.

The firing came Wednesday morning after an NBC executive claimed an official complaint about Lauer's behavior was filed Monday night. NBC framed the issue as new and sudden, but reporters from Variety Magazine have been onto Lauer for months and came out with a bombshell story Thursday night with the details of his behavior. According to their report, Lauer locking women in his office, gave a woman a sex toy with a detailed note about how he was going to use it, regular showed women his genitals and much more. Further, NBC executives protected him for years.

Lauer’s conduct was not a secret among other employees at “Today,” numerous sources says. At least one of the anchors would gossip about stories she had heard, spreading them among the staff. “Management sucks there,” says a former reporter, who asked not to be identified, speaking about executives who previously worked at the show. “They protected the shit out of Matt Lauer.”

The allegations against Lauer aren't new and back in 2012 former Today Show host Katie Couric told Bravo's Andy Cohen that Matt Lauer's most annoying habit was "pinching her on the ass a lot."

Keep in mind Lauer was close friends with now disgraced Hollywood movie mogul Harvey Weinstein. When NBC executives were approached with the story about Weinstein's behavior by NBC reporter Ronan Farrow earlier this year, they squashed it.