In China, There’s No Hope on North Korea 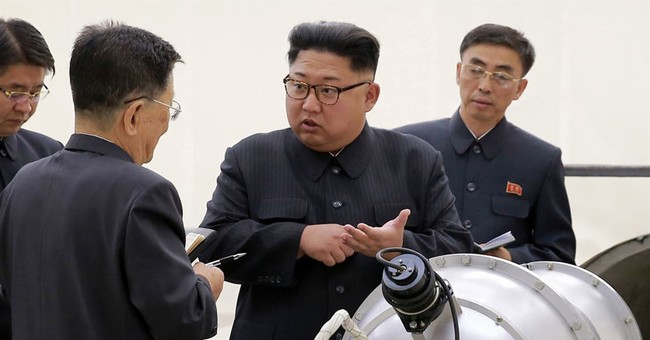 BEIJING – President Trump has returned to Washington D.C. after a 12-day historic trip through Asia. On his stop through China, Trump met with President Xi and discussed the increasingly dire situation with North Korea’s nuclear ambitions and threats.

But according to Dr. Tong Zhao, a fellow at the Carnegie-Tsinghua Center for Global Policy in Beijing, the meeting between the two leaders was only surface level jargon and hardly diplomacy conducive to reaching a joint solution on solving the North Korean nuclear crisis.

“I don’t see any substantive results,” Zhao said during a roundtable meeting discussion with a handful of journalists in China on a delegation hosted by the China-United States Exchange Foundation.  “I don’t think this meeting achieved much regarding North Korea. Maybe the two leaders got some personal time, private time together to discuss North Korea, but in terms of results, I don’t see any major results.”

Zhao argues the breakdown and lack of progress comes with fundamental differences and disagreements between the United States and China about how to solve the North Korea problem.

“Even though at the surface level they appear cooperative, deep down their approaches of dealing with North Korea are fundamentally different and the gap is so huge I think there is no chance these two countries can bridge this gap in a short time and be able to cooperate much deeper,” Zhao says.

According to Zhao, the first disagreement is about why North Korea pursues nuclear weapons in the first place. China believes North Korean President Kim Jong Un is paranoid and wants a full-blown nuclear program because he feels threatened. He wants to protect his regime. The more Kim Jong Un feels backed into a corner, the more provocative he will become.

The U.S., from the China side, is perceived as believing North Korea doesn’t need nuclear weapons because the regime has plenty of artillery power to protect the regime and that Kim Jong Un is pursuing a nuclear program for expansionist reasons.

China is also of the opinion that North Korea wants to negotiate in good faith, while the U.S. is skeptical of North Korea keeping its end of any potential deal based on past breaches under previous administrations.

China’s short-term strategy is to freeze North Korea’s nuclear program, with a long-term goal of denuclearizing the peninsula altogether. The U.S. wants to end the North Korean threat as soon as possible, without getting into a full-blown war in the region. This means eradicating the nuclear program completely, with a simple freeze of the program serving as a non-starter for negotiations.

But one of the biggest problems with the China-U.S. relationship comes with China’s feeling that North Korea really isn’t their problem, despite President Xi’s personal disdain for Kim Jong Un.

According to Zhao, China feels it is unfairly asked to take on the consequences for punishing the regime and feels the U.S. is asking China to issue provocations that have no benefit to them. In fact, economic provocation only puts China on North Korea’s map as a target for its missiles.

Further, Zhao argues China doesn’t actually have influence over Kim Jong Un and his regime, even with extreme economic sanctions.

“We [China] have to be patient because it’s our only option,” Zhao says.

As far as any hope for a solution to moving forward, Zhao suggests open and direct communications between the United States and North Korea, rather than through intermediaries which further complicate delicate diplomatic negotiations. The U.S. and China must get past the surface of diplomacy and properly negotiate around fundamental differences.

“There has been no deep discussion on fundamental disagreements,” Zhao says. “It is really important the United States and North Korea talk directly.”