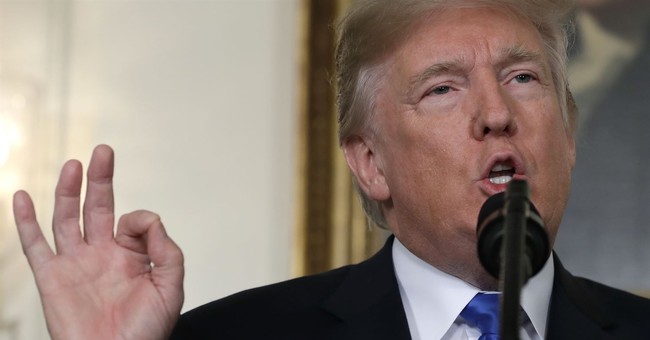 Speaking from the White House Friday afternoon, President Trump officially announced he will not re-certify the Iran nuclear agreement and officially put the Iranian regime on notice as an enemy of the United States.

"I've ordered a complete strategic review of our policy toward the rogue regime in Iran. That review is now complete," Trump said. "As president of the United States, my highest obligation is to ensure the safety and security of the American people."

"We will not make this certification. We cannot continue down a path of more violence and terror," he continued. "The Iran deal was one of the worst and one sided transactions the United States has ever entered into."

President Trump has not scrapped or pulled out of the Iran nuclear agreement, but instead has chosen not to re-certify it. This means the deal will be reviewed by Congress and if proper changes are not made over the course of the next 60 days, the U.S. will back out completely.

During his remarks, the President revealed Iran has violated the terms of the deal and said the region has become more unstable since its passage in 2015.

"The Iranian regime has committed multiple violations of the agreement," Trump said.

"Most importantly, Iran is not living up to the spirit of the deal," he continued. "The Iran deal was supposed to lead to peace and stability in the region and yet, while the U.S. adheres to the deal [Iran] continues to fuel conflict, terror and turmoil throughout the Middle East."

The President laid out three main goals of a broader Iran strategy moving forward: Working with allies to counter the regime, placing additional sanctions on the regime for financing of terror, addressing the regime's proliferation of missiles and denying Iran all paths to a nuclear weapon.

Drawing on the history between the Iranian regime and the United States, starting with the 1979-1981 Iranian hostage crisis and continuing through hostile actions of today, President Trump called out the regime for its long history of terrorism against Americans and western allies. He blasted the Obama administration for enabling the regime and funneling billions of dollars into the hands of terrorists.

"Beginning in 1979, agents of the Iranian regime illegally seized the U.S. embassy in Tehran and held more than 60 Americans hostage during the 444 days of the crisis.  The Iranian-backed terrorist group Hezbollah twice bombed our embassy in Lebanon -- once in 1983 and again in 1984.  Another Iranian-supported bombing killed 241 Americans -- service members they were, in their barracks in Beirut in 1983," Trump said. "In 1996, the regime directed another bombing of American military housing in Saudi Arabia, murdering 19 Americans in cold blood."

"Iranian proxies provided training to operatives who were later involved in al Qaeda’s bombing of the American embassies in Kenya, Tanzania, and two years later, killing 224 people, and wounding more than 4,000 others," he continued. "The regime harbored high-level terrorists in the wake of the 9/11 attacks, including Osama bin Laden’s son.  In Iraq and Afghanistan, groups supported by Iran have killed hundreds of American military personnel."

President Trump also went after the Iranian Revolutionary Guard Corps, pointing out their attempt to bomb a restaurant in Washington D.C., and called on the Treasury Department to issue additional sanctions on the organization and its leaders.

In terms of renegotiating the deal, President Trump called on Congress and foreign allies to get to work amending the agreement by strengthening enforcement. Preventing the development of an intercontinental ballistic missile and a nuclear bomb will be the center focus, in addition to changing Iran's overall behavior.

"Today I am announcing our strategy to ensure that Iran never, and I mean never, acquires a nuclear weapon," Trump said. "I urge our allies to join us in taking strong actions to curb Iran's dangerous and destabilizing behavior."