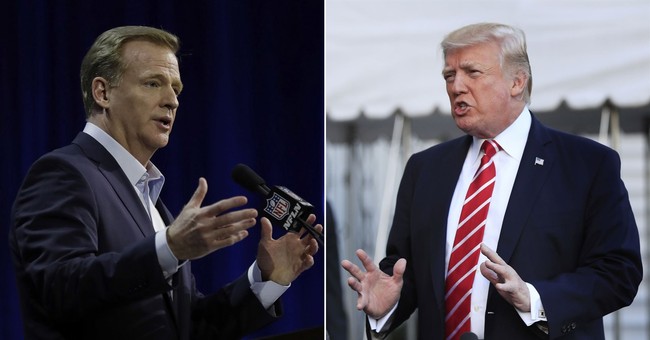 "Like many of our fans, we believe that everyone should stand for the National Anthem. It is an important moment in our game,” Goodell released in a lengthy statement. “We want to honor our flag and our country, and our fans expect that of us."

"Everyone involved in the game needs to come together on a path forward to continue to be a force for good within our communities, protect the game, and preserve our relationship with fans throughout the country," he continued.

President Trump has been paying close attention to NFL players kneeling before games in disrespect for the flag for weeks. Over the weekend, Vice President Mike Pence walked out of a Colts game after players refused to stand.

"We would certainly support the NFL coming out and asking players to stand, just as the President has done.  We support the national anthem, the flag, and the men and women who fought to defend it.  And our position hasn’t changed on that front.  We’re glad to see the NFL taking positive steps in that direction," she said.

Earlier this week, Dallas Cowboys owners Jerry Jones said players should stand up or be benched.