Trump is Winning The Battle Against McConnell in Kentucky...By A lot 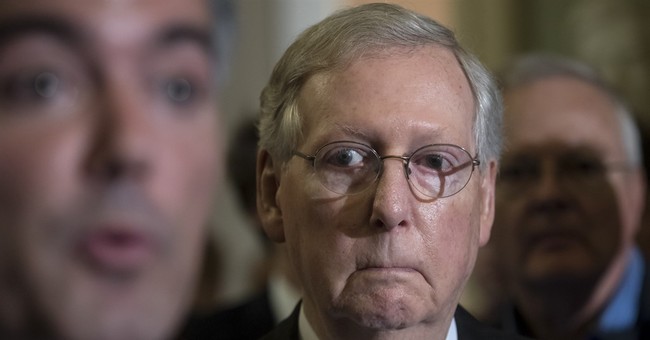 The battle between President Donald Trump and Senate Majority Leader Mitch McConnell keeps escalating, with the two leaders reportedly getting into heated phone calls earlier this month about how to move a successful Republican agenda on Capitol Hill. Now, they aren't speaking.

But according to new polling, Trump is trouncing McConnell in his home state of Kentucky and overwhelmingly beats the majority leader on approval from voters.

A Public Policy Polling survey found just 18 percent of respondents approve of the job McConnell is doing, compared with 74 percent who disapprove.

President Trump has an approval rating of 60 percent in Kentucky. Slightly more than one-third of respondents, 36 percent, disapprove of the job the president is doing.

During a town hall meeting in the Blue Grass State at the start of the August recess, McConnell said Trump had "excessive expectations" about how quickly legislation should move after an Obamacare repeal bill failed in the Senate by a single vote.

Recommended
Men Give Birth. America Was Founded in 1619. And Israel Is the Aggressor.
Dennis Prager

The remarks prompted Trump to respond on Twitter, where he reminded McConnell of the GOP's long held promise to repeal and replace Obamacare, which was made far before Trump ever took office.

The relationship has been on ice ever since.