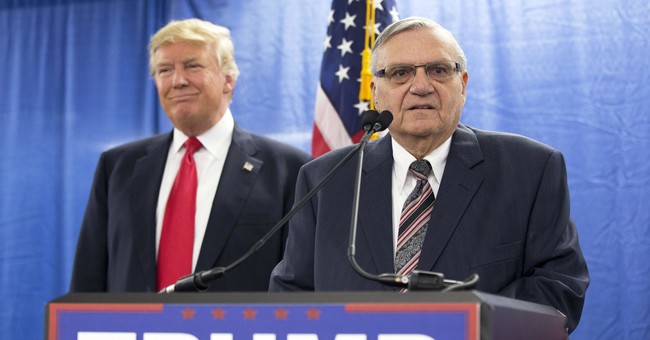 President Trump is headed to Arizona Tuesday where he will tour the Yuma sector of the southern border with Mexico and hold a campaign style rally in Phoenix.

During a recent interview with Fox News, Trump said he was seriously considering a presidential pardon for former Maricopa County Sheriff Joe Arpaio. Arpaio was recently found in contempt by a federal judge for failing to to follow orders requiring he halt targeted traffic stops against illegal immigrants. It is speculated Trump may announce the pardon during the rally Tuesday night.

While the potential move has been criticized by Washington D.C. elites and the media, Arizona Congressman Trent Franks is urging the President to follow through.

“Sheriff Arpaio has been a long-respected member of the law enforcement community who has dedicated his life to keeping Arizona communities safe. He has no prior convictions, no criminal record, no record of wrongs. In his twilight years, he deserves to retire peacefully and enjoy the satisfaction of a hard-earned and honorable retirement," Franks said in a statement. “Let us have an honest moment – this has been a political prosecution from the beginning. The real reason Arpaio is in legal trouble right now is because a Clinton-appointed judge decided to issue a judgment that contradicted every single witness that testified in the case.

“Pardoning Sheriff Arpaio would be celebrated by Arizonans that appreciate and respect a man who has accomplished so much for law and order in our state. It would absolutely be the right thing for President Trump to pardon Sheriff Joe,” he continued.

Franks also laid out his argument in an op-ed for USA Today, saying Arpaio has "dedicated his whole life to keeping his fellow human beings safe" and has "protected Arizona communities."

Arpaio faces up to six months in prison and will be sentenced in October, unless of course Trump bails him out.

Arpaio regularly campaigned for Trump during the 2016 presidential election and lead the search for President Obama's birth certificate.