No, U.S. Press Wasn't Kept Out of Trump's Meeting With Lavrov While Russian Reporters Were Let In 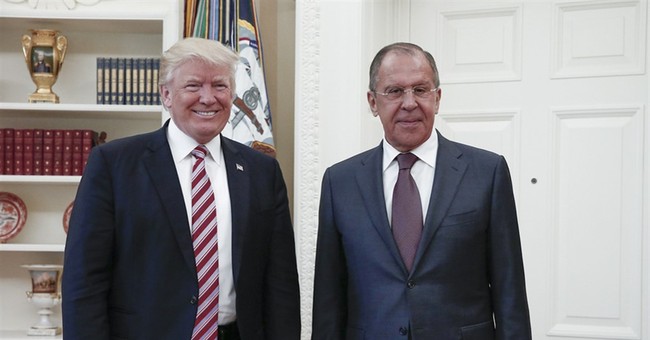 According to the pool report, which cites a White House official, the meeting was closed press but official photographers for the White House and the Russian government were present. From reporter Jordan Fabian (bolding is mine):

I've received multiple questions from my colleagues in the press corps about who was allowed into this morning's meeting with President Trump and Russian Foreign Minister Sergey Lavrov.
The questions arose in part because TASS, the Russian state-owned news agency, published photos from the meeting, even though it was closed to the press.
This was the White House's response when I asked whether members of the Russian media were allowed into the meeting:
"On background, our official photographer and their official photographer were present, that's it."

While photos of the meeting were attributed to a state owned Russian "news" agency TASS, which prompted questions about why Russian reporters were let in and U.S. press kept out, keep in mind there is no such thing as an independent press with the Kremlin. Most "news" agencies are propaganda machines controlled by the government. Their "reporters" work for the government, including the official photographer allowed into the meeting.

Photos of Trump's meeting with Lavrov and Kislyak just hit the Getty wire and they're all credited to Russian news agency TASS pic.twitter.com/qE9lWB6KuS

A Group Of Parents Sent Their Kids' Face Masks To A Lab For Analysis. Here's What They Found
Townhall
NBC News assures us that despite viral images, it's mostly white people who are assaulting Asian Americans
Twitchy
Project Veritas Drops the Secret Recordings Made About Fox by Ivory Hecker
Redstate
[WATCH] Jon Stewart Tells the Truth About the Wuhan Virus and There's Nothing a Horrified Stephen Colbert Can Do to Stop Him
PJ Media