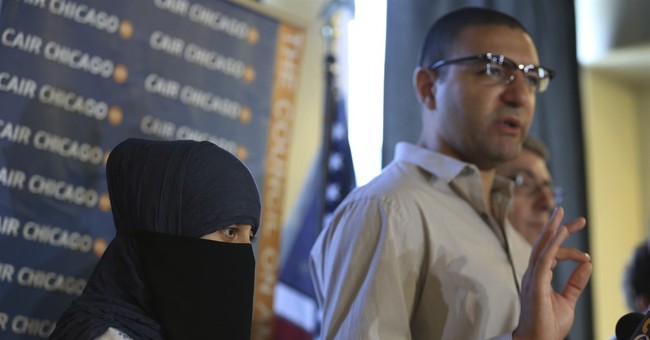 "Join representatives of CAIR, Dar Al-Hijrah Islamic Center and MAS-PACE at a town hall meeting in Falls Church, Va., on the Trump administration’s Muslim Ban 2.0. Learn how the ban impacts your civil rights. The event will also include a free 'Citizenship Application Clinic,'" the event invite states.

Trump's travel order doesn't single out Muslims, despite what extremists groups like CAIR continue to claim. In fact, Christians and other religious minority groups under genocide by the Islamic State in Syria and Libya are also barred from entering the country under the ban.

CAIR has been tied to the terrorist organization Hamas, which sends suicide bombers into Israel and encourages knife attacks. CAIR was also an unindicted co-conspirator in the Holy Land Foundation trial.

One of the most significant terrorism prosecutions brought by the government since 9/11 commenced trial last month in federal district court in Dallas. The government’s 42-count indictment charges seven individuals and the Holy Land Foundation — the biggest Islamic charity in the United States — with offenses including conspiracy to provide material support to a foreign terrorist organization, namely, Hamas.

The charges are dramatic. According to the indictment, U.S. based members of the Muslim Brotherhood established a Palestine Committee that was ultimately charged with the task of raising funds supporting Hamas’s efforts to eliminate the state of Israel. After the signing of the Oslo Accords in 1993, the Palestine Committee swung into high gear. At a secret three-day meeting in Philadelphia in October, 1993 (monitored by the FBI), those in attendance discussed how best to continue to support Hamas without being viewed as terrorists.

In 2014, the United Arab Emirates put CAIR on their official terrorist organization list and the group has long standing ties to the Muslim Brotherhood.