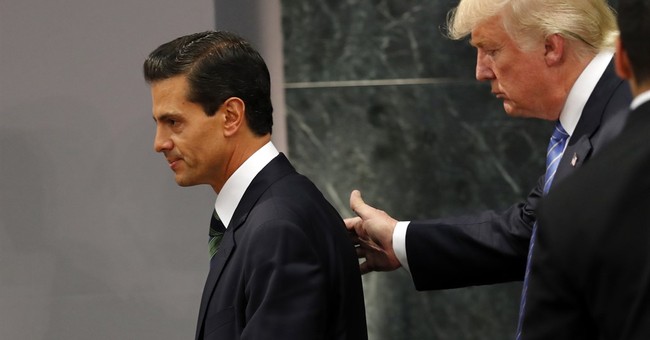 Over the past few days, U.S. President Donald Trump and Mexican President Enrique Pena Nieto have been sparring publicly on Twitter over cancelled meetings and who will pay for a wall on the southern border.

Mexico has taken advantage of the U.S. for long enough. Massive trade deficits & little help on the very weak border must change, NOW!

The U.S. has a 60 billion dollar trade deficit with Mexico. It has been a one-sided deal from the beginning of NAFTA with massive numbers...

of jobs and companies lost. If Mexico is unwilling to pay for the badly needed wall, then it would be better to cancel the upcoming meeting.

Friday morning Trump had an hour long phone call with Nieto. During the conversation, the two leaders agreed to keep their future conversations about funding for the wall out of the public venue.

"With respect to payment for the border wall, both presidents recognize their clear and very public differences of positions on this issue but have agreed to work these differences out as part of a comprehensive discussion on all aspects of the bilateral relationship," the White House released in a joint statement. "Both presidents have instructed their teams to continue the dialogue to strengthen this important strategic and economic relationship in a constructive way."