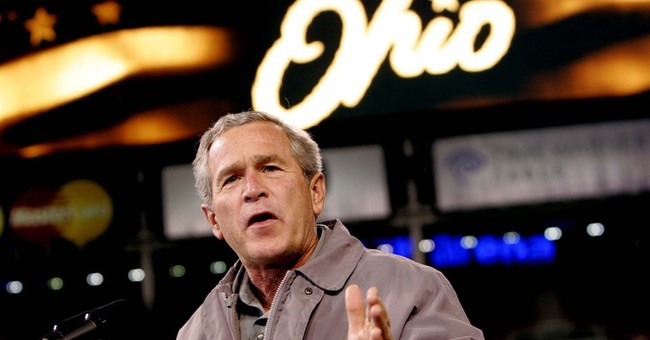 According to one of the world's most deadly and infamous terrorists, Khalid Sheik Mohammed, President George W. Bush wiped out plans for other imminent attacks by quickly invading Afghanistan after 9/11/2001.

According to a new book detailed by The Federalist and former Bush staffer Marc Thiessen, KSM admitted during enhanced interrogation the President's swift "shock-and-awe" action not only thwarted plans for follow up attacks to 9/11, but changed Al Qaeda's entire strategy.

In a new memoir by James E. Mitchell, the man who developed enhanced interrogation techniques the CIA used to glean information from terrorists under then-president Bush, Mitchell divulges the details of his conversations with Khalid Sheik Mohammed (KSM), the mastermind behind 9/11.

The book, entitled “Enhanced Interrogation: Inside the Minds and Motives of the Islamic Terrorists Trying To Destroy America,” offers a “first-person account of the EIT program” where Mitchell takes the reader “inside the secretive ‘black sites’ and cells of terrorists and terror suspects where he personally applied enhanced interrogation techniques.”

From Thiessen's review of the book:

Far from trying to draw us in, KSM said that al-Qaeda expected the United States to respond to 9/11 as we had the 1983 bombing of the Marine barracks in Beirut — when, KSM told Mitchell, the United States ‘turned tail and ran.’

‘Then he looked at me and said, ‘How was I supposed to know that cowboy George Bush would announce he wanted us ‘dead or alive’ and then invade Afghanistan to hunt us down?’’ Mitchell writes. ‘KSM explained that if the United States had treated 9/11 like a law enforcement matter, he would have had time to launch a second wave of attacks.’ He was not able to do so because al-Qaeda was stunned ‘by the ferocity and swiftness of George W. Bush’s response.’

The Obama administration rejected the Bush doctrine completely, ended enhanced interrogation in 2009 through an executive order and has been treating terrorism like a criminal problem, rather than warfare, for years. Terrorism around the world has skyrocketed during his tenure and the reckless pullout from Iraq allowed ISIS to emerge.

KSM is being held at Guantanamo Bay prison, the very place President Obama has worked tireless and unsuccessfully for years to shut down.