Obama on GITMO: I Haven't Been Able to Close The Dang Thing 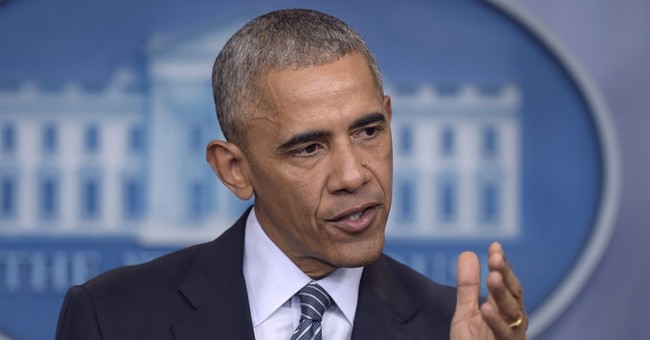 During a press conference in the White House briefing room Thursday afternoon, President Obama lamented not being able to fulfill his 2008 campaign promise of closing Guantanamo Bay Prison during his tenure in the Oval Office.

"It is true that I have not been able to close the darn thing," Obama said. "We now have significantly less than a hundred people there."

Obama: With respect to Guantanamo, it is true I have "not been able to close the darn thing" https://t.co/gWh6M8DTaV https://t.co/iGMLzSMNjw

Obama's emptying of the prison has caused great controversy throughout his presidency. In May 2014, the White House traded Army deserter Bowe Bergdahl for five high risk Taliban commanders.  Earlier this year, the Pentagon admitted the releases of GITMO detainees, who have a tendency to return to the battle field, has led to American deaths.

Paul Lewis, the Defense Department’s special envoy for Guantanamo closure, told the House Foreign Affairs Committee under questioning that “unfortunately, there have been Americans that have died because of Gitmo detainees.” He did not provide any details on whether those deaths occurred in terrorist attacks or on a military battlefield, or how many Americans were killed.

The Obama administration believes that at least 12 detainees released from the prison at Guantanamo Bay, Cuba, have launched attacks against U.S. or allied forces in Afghanistan, killing about a half-dozen Americans, according to current and former U.S. officials.

But The Washington Post has learned additional details about the suspected attacks, including the approximate number of detainees and victims involved and the fact that, while most of the incidents were directed at military personnel, the dead also included one American civilian: a female aid worker who died in Afghanistan in 2008. The officials, who spoke on the condition of anonymity to discuss a sensitive matter, declined to give an exact number for Americans killed or wounded in the attacks, saying the figure is classified.

No word yet on whether President Trump will refill the prison once he assumes his position as Commander-in-Chief.