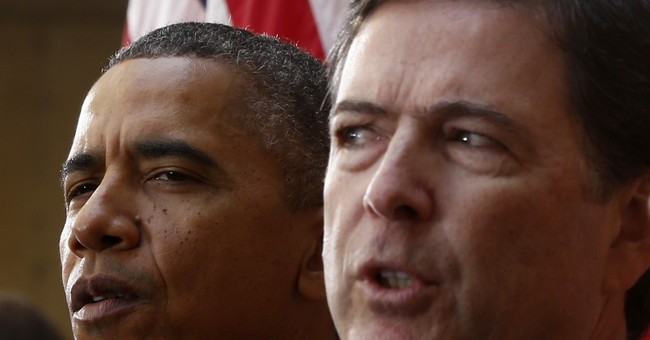 Since the FBI reopened its investigation of former Secretary of State Hillary Clinton's email server Friday, a number of previously pressing questions have made their way back into the fold.

Will classified information be found in the new probe? Will the deleted emails finally be discovered? Will Hillary Clinton finally be indicted?

The most important question doesn't solely include Clinton's fate, but how she'll be helped by others to avoid dragging out an FBI probe. Potential charges could be looming should she win or lose the race for the White House.

President Obama has the power to pardon Clinton on the simple prospect she could be charged with a crime or handed an indictment by the FBI. Because the FBI announced in July that they were not going to indict Clinton, there was no need for a pardon to be on the table. That has since changed.

Which brings us to the question: Will President Obama pardon Hillary Clinton before he leaves office?

As my colleague Ed Morrissey points out, President Gerald Ford pardoned President Richard Nixon after he resigned from the Oval Office and before he was ever officially charged with a crime. At the time of the pardon, nearly everyone knew and admitted Nixon was guilty. Ford was criticized for clearing him.

@KatiePavlich Not really. Ford pardoned Nixon before he got formally charged with any crime. It would be a huge political problem tho.

It's happened before, but for a number of reasons, a pardon for Clinton from Obama would be a long shot.

First, an Obama pardon of Clinton before an indictment would be an admission of guilt. President Obama has downplayed the scandal since it broke in 2015, said Clinton made "honest mistakes" with her server and repeatedly stated on the record that she didn't put national security at risk. We, of course, know she did--through information in FBI documents, the Wikileaks emails, and experts who have analyzed the vulnerability of the server to hackers.

Second, Democrats who nominated Clinton for president and elected officials who have endorsed her don't believe she is guilty of any wrongdoing. Republicans thought the opposite of Nixon, and were a main reason for the accountability that lead to his downfall.

As a result, Clinton's only option for a pardon is to be indicted, tried and convicted. There most definitely isn't enough time between now and Election Day (or until when Obama leaves office), for this scenario to play out. Not to mention, an FBI indictment is still highly unlikely given the non-indictment the first time around (despite evidence Clinton grossly mishandled top secret, classified information).

Obama has the authority to pardon Hillary, but for the sake of maintaining the argument she is innocent, it won't happen. Further, there's this issue to consider:

@KatiePavlich It would damage Democrats for years.

All of that being said, if Obama does issue Clinton a pardon this will be the explanation given for why: