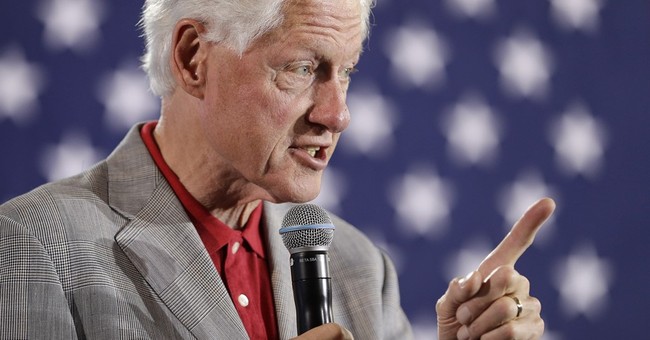 Yesterday during a campaign stop former President Bill Clinton, who was filling in for his wife as she recovered from pneumonia, claimed the former First Lady had the flu.

“Last time I checked, millions of people were getting the flu every year," Clinton said, clearly making a gaffe since Hillary's doctor confirmed pneumonia.


A few days ago during an interview with CBS News, Bill Clinton openly stated that Hillary has experienced a number of episodes, not helping to debunk with the narrative she is too frail and sick to serve as president.

"On more than one occasion, over the last many, many years, the same sort of thing happened to her when she got severely dehydrated," he said referring to her incident Sunday at the Ground Zero 9/11 memorial service.

All of this is to say, Bill Clinton's isn't exactly helping the cause and now according to Democrats Bill Clinton just doesn't have the "it" factor anymore. From POLITICO:

With eight weeks to go and Hillary Clinton’s lead slipping, some of her allies have begun to question how much the campaign should lean on him and how bright his legacy star power still is.

“We need to hear directly from the candidate at this point in the election,” a longtime Clinton ally and Democratic National Committee member, said. “It’s nice to have him, but the only real surrogate who works at this point is President Obama.”

“When you see Bill Clinton, the first thing you think of is not Hillary, it’s not tomorrow — it’s the former president and yesterday,” said the DNC member. “He can go and raise money, but in terms of what she is going to do as president — she needs to be making that case. I’m voting for Hillary. I’m not voting for Bill.”

This admission from someone working at the DNC proves Democrats, including Bill Clinton, have been unable to redefine or successfully reintroduce Hillary Clinton as a presidential candidate to the American people. This has been the strategy throughout the year for the Clinton campaign and it's clearly failed. Shaking the image of Washington establishment is impossible for Hillary, and her husband only backs up that image.

Let Them Destroy Each Other
Townhall
'You ALL own this crapfest': MERCILESS thread takes holier-than-thou #NeverTrump APART for giving us President Biden
Twitchy
New Timeline of Mark Milley 'Treason' Invalidates His Defense
Redstate
Latest Durham Indictment May Make Russiagate the Most Corrupt Scandal in U.S. History
PJ Media