Of Course: Obama Defends Kaepernick's Refusal to Stand For The National Anthem 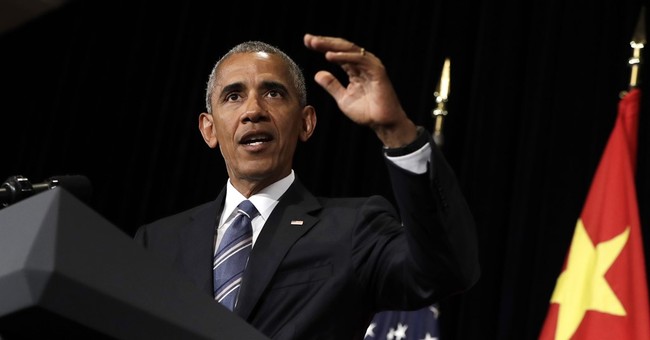 Speaking at the G20 Summit in China Monday, President Obama weighed in on 49ers quarterback Colin Kaepernick's refusal to stand for the National Anthem before games, saying the "young man" is simply exercising his constitutional rights.  Obama also said Kaepernick's actions are hard for military members and those who have served to "get past."

"My understanding at least is that he’s exercising his constitutional right to make a statement," Obama said. "If nothing else what he’s done is he’s generated more conversation around some topics that need to be talked about."

"As a general matter when it comes to the flag and the National Anthem and the meaning that holds for our men and women in uniform and those who've fought for us, that is a tough thing for them to get past to then hear what his deeper concerns are," he continued.

Not once did Obama say Kaepernick's actions were disrespectful, but instead credited him for bringing attention to an issue and for being part of the process.

Obama said he hasn't been "thinking about football much," so maybe he missed a Kaepernick's socks: pigs in police hats.

The Santa Clara Police Union has threatened not to provide security services at future games and 49ers fans have been burning Kaepernick jerseys.

NBC Bay Area obtained a letter, penned by union members, to the San Francisco 49ers stating that if the organization does not take action against Kaepernick, "it could result in police officers choosing not to work at your facilities."

The Santa Clara Police Department is the lead police agency at Levi’s Stadium. During 49er games, around 70 officers volunteer to work and are paid as security personnel. Now it is unknown whether more than half of those officers will show up at the team's next game on Sept. 12.