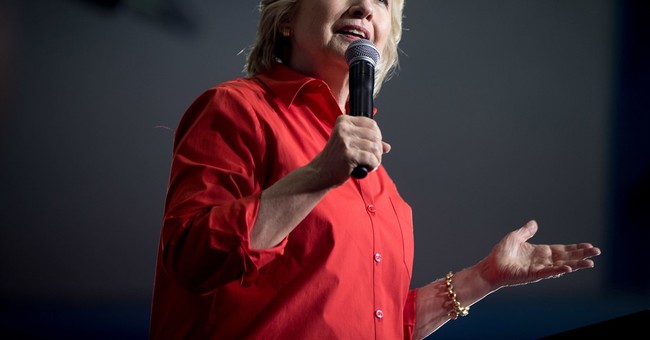 Over the weekend Democrat presidential nominee and former Secretary of State Hillary Clinton sat down with Fox News' Chris Wallace for her first official interview since accepting her Party's nomination at the DNC convention in Philadelphia last week.

During the interview, Clinton was asked about the storing and transfer of top secret, classified information on her private email server. Clinton again denied she ever sent or received "marked" classified information, despite FBI Director James Comey saying she did in fact do so during a press conference in early July.

Her lies during the interview earned her four pinocchios from the Washington Post, which Guy wrote about extensively yesterday.

Now, Politifact is giving Clinton a "Pants on Fire" rating for her claims.

Clinton said regarding the presence of classified information in her email, FBI director James "Comey said my answers were truthful, and what I've said is consistent with what I have told the American people."

A reasonable person would interpret Clinton’s statement to mean that Comey has endorsed her public remarks about her email. This is not the case.

Talking specifically about Clinton’s closed-door FBI interview, Comey said there is "no basis to conclude she lied to the FBI" about her email practices. But Comey has specifically declined to comment on whether Clinton’s public remarks have been accurate.

Further, while not explicitly rebuking Clinton’s public comments, Comey highlighted a major problem with them.

Clinton repeatedly said she did not have any classified information whatsoever in her email, marked or unmarked. After the FBI investigation, including the interview with Clinton, Comey said she unequivocally did.

We rate her claim Pants on Fire.

Clinton's biggest challenge on the campaign trail is getting Americans to trust her. Her continued lies about her private email server aren't helping in that category.