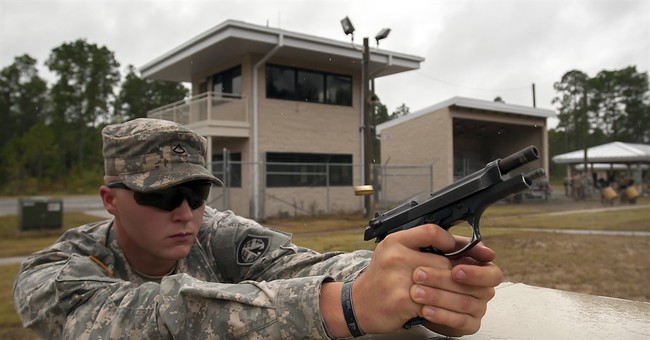 One year ago, we learned the Department of Veterans Affairs has been stripping veterans of their Second Amendments rights for simply needing help managing their finances. As I reported in April 2015:

According to Grassley's office, the VA "reports individuals to the gun ban list if an individual merely needs financial assistance managing VA benefits," keeping them from exercising their Second Amendment rights.

On top of serious concerns about the infringement of Second Amendment rights, Grassley is raising questions about the lack of due process for veterans classified as "mentally defective," and therefore unfit to purchase a firearm, who simply need help managing VA benefits.

For months, lawmakers have called on President Obama, the administration and the VA to explain why veterans who accept financial management help are being deemed "mentally defective" and placed into the FBI-background check system as ineligible to purchase or own a firearm.

In the latest development of this story, Judiciary Committee Chairman Chuck Grassley is urging lawmakers on the Senate Appropriations Subcommittee on Military Construction, Veterans Affairs, and Related Agencies to restrict VA funding being used to place veterans on the firearm no buy list as they consider the 2017 budget. From Grassley's office:

Grassley is calling on Senate appropriators to restrict federal funds from being used by the VA to categorize individuals as mental defective without a judicial ruling that they are a danger to themselves or others.  This would require the VA to comply with the fundamental purpose for any firearm restriction.  Grassley and Senate Veterans’ Affairs Committee Chairman Johnny Isakson are also raising the questionable name reporting standard and due process concerns with the VA, and are calling on the agency to explain its rationale for linking financial competency to public safety.

From a letter sent from Grassley to the Subcommittee:

Federal law requires that before a person is reported to the NICS, they be determined a “mental defective.”  The Bureau of Alcohol, Tobacco, and Firearms (ATF) promulgated a regulation to interpret what “mental defective” means within 18 U.S.C. § 922(g).  The ATF defined that term as a person with marked subnormal intelligence or mental illness, incompetency, condition, or disease who is a danger to themselves or others, or lacks the mental capacity to contract or manage his own affairs.[4]  The purpose of this regulation is to preclude such persons from possessing or owning firearms.  As such, the level of impairment of one’s mental state that justifies taking away the right to own firearms must rest at a severe and substantial level – where the mere possession of a weapon constitutes a danger to self or the public.  Otherwise, the government has no compelling reason to preclude firearm possession or ownership.

The VA regulations do not follow ATF’s severe and substantial mental state standard.  For example, the VA does not determine if a veteran is a danger to self or others.  Rather, the VA analyzes a person for mental defect under an inappropriate standard designed for a different purpose: to appoint a fiduciary, not to regulate firearms.  Unlike the ATF standard, the VA’s sole purpose is to analyze a veteran to determine if he or she can or cannot manage their finances, and, if not, appoint them a fiduciary.  It is clear, therefore, that the core purpose of these competing regulations is different.  On the one hand, the ATF regulation is designed to regulate firearms.  On the other hand, the VA regulation is designed to appoint a fiduciary.  At no time in the process does the VA determine a veteran to be a danger to self or others, a key determinant for whether someone is a “mental defective” precluding the right to own firearms.

Accordingly, in light of the fact that the Second Amendment is a fundamental right, the VA ought to be prevented from reporting veterans to the NICS unless and until the VA first determines they are a threat to themselves or to the public.  This rider mandates that approach.


The 2017 federal budget will be finalized later this year.
McAuliffe Can't Draw Crowd in Blue Arlington, and Other Cringe Details in the Final Days of Virginia Race
Rebecca Downs
Sen. Hawley Calls on AG Garland to Resign Over Memo Targeting Parents at School Board Meetings
Landon Mion
Yet Another Afghan Refugee Has Been Charged with Rape
Rebecca Downs
Fox News' Chris Wallace: Jen Psaki is 'One of the Best Press Secretaries Ever'
Landon Mion
Twitter Censors Official Account of Rep. Jim Banks for Tweet About Rachel Levine
Rebecca Downs
Bill Maher Backs Dave Chappelle Amid Criticisms: 'Everyone Needs to Netflix and Chill the F--- Out'
Landon Mion
CARTOONS | Al Goodwyn
View Cartoon
Most Popular