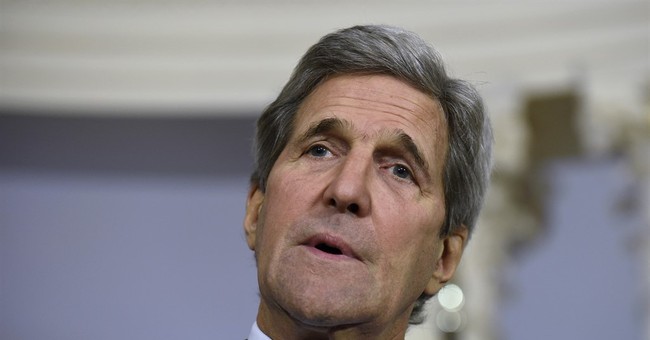 Republicans and Democrats in the House voted unanimously late Monday night to officially declare the extinction of Christians by ISIS a genocide. More from AP:

Ratcheting up the pressure on the Obama administration, the House has overwhelmingly approved a resolution that condemns as genocide the atrocities committed by the Islamic State group against Christians and other religious and ethnic minorities in Iraq and Syria.

The non-binding measure, passed Monday by a vote of 393-0, illustrated the heavy bipartisan support for action on Capitol Hill. Secretary of State John Kerry is leaning toward making a genocide determination against the Islamic State and could do so as early as this week, when a congressional deadline for a decision has been set.

“As many governments, legislative bodies, non-governmental organizations, and world leaders have already concluded, the available evidence demonstrates that ISIS’s actions rise to the level of genocide. Furthermore, we understand that recent information received from on-the-ground interviews in the region and other sources establishes without question that ISIS is committing genocide and makes clear that claims that it is offering jizya or dhimmi status are a publicity stunt or extortion payments that pervert these classical terms,” the letter, submitted on behalf of The Philos Project, The American Mesopotamian Organization, The Assyrian Aid Society of America and The Iraqi Christian Relief Council, states.

“The Convention on the Prevention and Punishment of the Crime of Genocide (“Genocide Convention”) prohibits the intentional destruction, in whole or in part, of an ethnic or religious group by, inter alia, killing members of the group, causing serious bodily or mental harm to members of the group, or deliberately inflicting on the group conditions of life calculated to bring about its physical destruction,” the letter continues. “Publicly available information strongly suggests that ISIS is subjecting Assyrian and other Iraqi and Syrian Christians living in areas under the control of ISIS to genocidal conditions. ISIS purportedly offers the Assyrian Christians three options: (1) convert to Islam, (2) assume dhimmi status and pay an associated jizya tax, or (3) leave the territory. The facts suggest that, in reality, there is no choice. Those who refuse or are otherwise unable to comply are executed, and in many instances the option of paying the jizya tax is not made available. The evidence therefore suggests that the jizya tax is not a real option and may be just a pretext to justify ISIS’s atrocities. That ISIS purports to permit Assyrian Christians to pay a jizya tax to avoid conversion, execution, or displacement does not preclude a finding that ISIS’s persecution of such Christians violates the Genocide Convention.”

The State Department is supposed to decide by Thursday whether to agree with the House's genocide declaration on behalf of the Obama administration, but the deadline is likely to be missed as Secretary of State John Kerry punts the issue for political reasons. For months the White House has hesitated to use the term, citing legal definitions and consequences.


Experts on Middle East terrorism and genocide pleaded with Kerry last week during a special meeting in Washington DC to make the declaration.

Several experts on Middle East terror made direct pleas to U.S. Secretary of State John Kerry to label Christian slaughter in the region as “genocide” Thursday morning during a press conference in Washington, D.C.

“The U.S. is better than this,” said humanitarian and author Johnnie Moore, who published a book last year called Defying ISIS.

“What will Kerry tell his grandchildren” if we don’t take action against this Christian slaughter? he urged.

Moore was just one voice in an important event hosted by the Knights of Columbus to unveil their new in depth report on the rampant murder of religious minorities in the Middle East. The KOC sent its almost 300-page compilation, the largest of any of its kind, to the State Department on Wednesday in hopes of receiving an urgent response from the administration.

The Knights’ request for a meeting with Kerry has gone unanswered. Since October, the secretary of state has been claiming the agency simply doesn’t have enough facts to call what's happening to Christians in Iraq, Syria and elsewhere genocide.

With the KOC's report, Kerry doesn’t have that excuse anymore.