Humanitarian: 'What Will Kerry Tell His Grandchildren' if He Doesn't Label Christian Slaughter 'Genocide'? 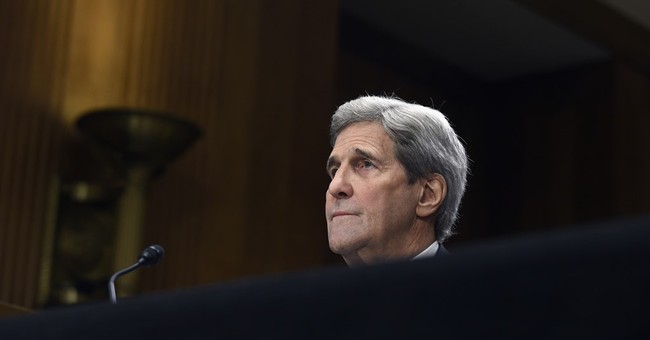 Update: Congress will be voting on Rep. Jeff Fortenberry's (R-NE) genocide resolution, H. Con. Res. 75, this Monday, to determine whether ISIS violence against Christians and other religious minorities should be labeled genocide.

Washington, D.C. - Several experts on Middle East terror made direct pleas to U.S. Secretary of State John Kerry to label Christian slaughter in the region as “genocide” Thursday morning during a press conference in Washington, D.C.

“The U.S. is better than this,” said humanitarian and author Johnnie Moore, who published a book last year called Defying ISIS.

“What will Kerry tell his grandchildren” if we don’t take action against this Christian slaughter? he urged.

Moore was just one voice in an important event hosted by the Knights of Columbus to unveil their new in depth report on the rampant murder of religious minorities in the Middle East. The KOC sent its almost 300-page compilation, the largest of any of its kind, to the State Department on Wednesday in hopes of receiving an urgent response from the administration. Based on recent history, though, they may be waiting in vain.

The Knights’ request for a meeting with Kerry has gone unanswered. Since October, the secretary of state has been claiming the agency simply doesn’t have enough facts to call what's happening to Christians in Iraq, Syria and elsewhere genocide.

With the KOC's report, Kerry doesn’t have that excuse anymore.

Two aspects are required for a campaign to be labeled genocide. First, the act has to be done with intent. Second, there has to be evidence of barbaric action.

Both of these requirements are met in the case of ISIS’ assault against Christians. As Thursday's panel noted, the terror group is guilty of confiscating Christians’ property, using and selling young women in sex slavery, murdering, and beheading anyone who doesn’t conform to their beliefs. In one horrid example, Nina Shea, director of the Hudson Institute’s Center for Religious Freedom, recalls one woman whose husband was crucified to the door of their home. Stories like that abound all over the Middle East.

Katie wrote an important column on this very subject on Thursday, noting that Christians in Iraq and Syria may be extinct within five years should we fail to act.

Yet, we wait for the White House to respond. Why, humanitarians ask, at the very least, does the administration not apply the label “genocide” to this murder campaign? Greg Stanton of Genocide Watch has a notion: Because the label requires the White House to follow it up with action. This administration is “not ready to make that determination” because it’s “not determined” to stop ISIS with the necessary force, Stanton surmised.

“This administration has hesitated to take precipitous action” against ISIS, Anderson agreed.

It’s not just Kerry who is to blame. Samantha Power, who once wrote a book entitled World Has to Step Up in Fight Against ISIS, has failed to use the same rhetoric as our U.S. Ambassador to the United Nations.

Columbus School of Law Professor Robert Destro’s disgust with the current administration was most evident at Thursday's presser. He included Mary McLeod, Kerry’s former acting legal advisor, in his line of target when blaming the administration for not properly addressing the Middle East mess.

This isn’t the first time the U.S. has dragged its heels in applying the proper label to a mass slaughter. The denial of genocide in Rwanda is one of the “great moments of shame” for our country, said Stanton. In 1994, a young woman in Rwanda approached him and pointedly asked him, “Why did you abandon us?”

“I don’t want to have to answer that question again,” Stanton said.