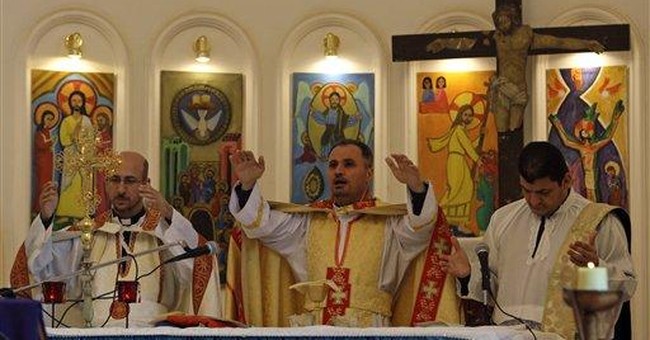 According to the international Catholic charity Aid to the Church in Need, Christians will be extinct from Iraq in just five years as ISIS continues to reign over the majority of the country while wiping Christians and their monuments from history. Fox News ran a story with the details late last year:

The dwindling Christian population of the Middle East could vanish completely within a decade unless the global community intervenes, say alarmed aid groups who say followers of the Bible are being killed, driven from their land or forced to renounce their faith at an unprecedented pace.

The world has largely stood by as a dangerous tide of intolerance has washed over the region, according to a new study by the international Catholic charity Aid to the Church in Need. The study includes disturbing data about the plunging numbers of Christians in the part of the world that gave birth to the faith, and makes a dire prediction of what could happen.

While Christians are under siege from Islamic State radicals in war-torn Syria and Iraq, the report notes that the religion is being targeted throughout the region. Christians who have managed to escape ISIS have fled to places like Europe and Lebanon, while members of the faith also are under increasing pressure in Iran, Pakistan, Saudi Arabia and other Gulf nations.

The Christian population in Iraq has plummeted from 1.5 million in 2003 to current estimates of 275,000 and could be gone for good within five years, according to the report. The dwindling numbers are due to genocide, refugees fleeing to other countries, those who are internally displaced, and others hiding in plain sight and not allowing their faith to be publicly known.

“Last Christmas was the first time that bells did not ring out in the city of Mosul in 2,000 years," Brown said. “I think that speaks to the reality that hundreds of thousands of Christian families are living on the edge of extinction.”


The definition of genocide is, "the deliberate killing of a large group of people, especially those of a particular ethnic group or nation."

ISIS extinguishing Christianity where ever they conquer doesn't fall under this definition according to the White House.