Trying To Save His Own Job, Chicago Mayor Rahm Emanuel Fires His Police Chief 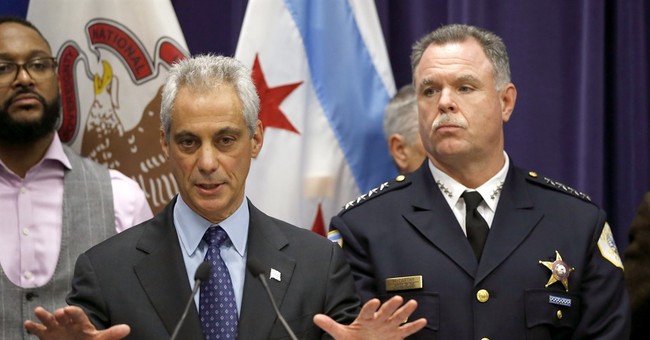 As demands for his own resignation continue to grow louder, Chicago Mayor Rahm Emanuel has fired Police Chief Gary McCarthy. The firing comes after uproar from the community over the long delayed release of a video showing a Chicago police officer shooting a black teenager 16 times. The video was held for a year before being released last week. Protests in the city have regularly taken place ever since.

Warning, the following video is graphic:

During a rare press conference held Tuesday, Emanuel was asked directly about whether the video was held for a year because he was in a close reelection fight. He denied that as the case.

McCarthy has been at the center of controversy for years as Chicago remains the bloodiest city in the country with more than 400 murders just this year. Further, McCarthy has been accused in the past of cooking the books on falling crime and homicide rates. He also famously said police would shoot concealed carry permit holders when a ban on the practice was struck down two years ago by a federal court.

Emanuel is now in the process of looking for a new police chief as he attempts to save his own job. In the meantime, former head of the DOJ Civil Rights Division John Escalante will serve as interim chief.