Gowdy to Clinton: We Didn't Sign Up to Investigate Your Emails Madam Secretary, We're Here For The Truth 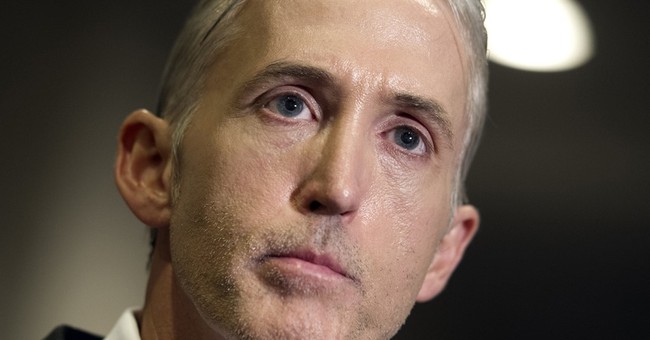 Benghazi Select Committee Chairman Trey Gowdy wasted no time Thursday morning going after Hillary Clinton and allegations from her presidential campaign team that his investigation into the 9/11/2012 terror attack is solely focused around her. From Gowdy's opening statement (bolding is mine):

Chris Stevens, Sean Smith, Glen Doherty and Tyrone Woods served our country with courage and with honor. They were killed under circumstances most of us could never imagine. Under cover of darkness, terrorists poured through the front gate of our facility and attacked our people and our property with machine guns, mortars and fire.

It is important we remember how these four men died. It is equally important we remember how and why they lived. They were more than four images on a television screen. They were husbands, fathers, sons, brothers, family and friends. They were Americans who believed in service and sacrifice. Many people speak wistfully of a better world, but do little about it. These four men went out and tried to make it better. And it cost them their lives.

We know what they gave us. What do we owe them? Justice for those who killed them. We owe their families our everlasting respect and gratitude. We owe them - and each other - the truth.

Madame Secretary, I understand some people - frankly in both parties -have suggested this investigation is about you. Let me assure you it is not. And let me assure you why it is not. This work is about something much more important than any single person. It is about four U.S. government workers, including our Ambassador, murdered by terrorists on foreign soil. It is about what happened before, during, and after the attacks that killed these four men. It is about what this country owes those who risk their lives to serve it. It is about the fundamental obligation of our government to tell the truth - always - to the American people. Not a single member of this Committee signed up for an investigation into you or your email system. We signed up because we wanted to honor the service and sacrifice of 4 people sent to a foreign land to represent us - who were killed - and do everything we can to prevent it from happening to others.

I understand you wanted to come sooner than today so let me be clear why that did not happen. You had an unusual email arrangement with yourself, which meant the State Department could not produce your emails to us.

You made exclusive use of personal email and a personal server. When you left the State Department you kept those public records to yourself for almost two years. You and your attorneys decided what to return and what to delete. Those decisions were your decisions, not ours. It was only in March of this year we learned of this email arrangement. Since we learned of your email arrangement we have interviewed dozens of witnesses, only one of whom was about your email arrangement, and that was a very short interview because he invoked his Fifth Amendment privilege against self-incrimination.


It was reported publicly for the first time in February 2015 by the New York Times that Clinton had used a private email account and server to conduct all government business during her time as Secretary of State. We also learned she deleted more than 50,000 emails she deemed "private business."

Ranking Member Elijah Cummings used the majority of his opening statement to defend Clinton and to accuses Republicans of a political witch hunt.

"Republicans continue to spin new conspiracy theories that are just as outlandish and inaccurate," Cummings said. "The Select Committee has spent 17 months and $4.7 million in taxpayer funds. We have held four hearings and conducted 54 interviews and depositions. Yes, we have received some new emails—from Secretary Clinton, Ambassador Stevens, and others. And yes, we have conducted some new interviews. But these documents and interviews do not show any nefarious activity. In fact, it’s just the opposite. The new information we have obtained confirms and corroborates the core facts we already knew from the eight previous investigations. They provide more detail, but they do not change the basic conclusions. It is time for Republicans to end this taxpayer-funded fishing expedition. We need to come together and shift from politics to policy."