Obama Administration: Netanyahu is "Marginalizing Arabs" And We Might Not Back Israel at The UN Anymore 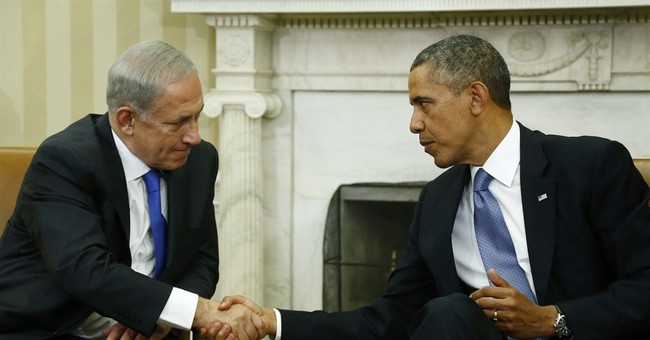 Less than 24 hours after Israeli Prime Minister Benjamin Netanyahu declared victory against opponent Isaac Herzog and just days after promising to reject a two-state solution, the Obama administration is vilifying Israel and claims the Jewish State is "marginalizing Arabs." From the Washington Examiner:

President Obama has yet to offer congratulations to Israeli Prime Minister Benjamin Netanyahu for his convincing re-election win, and the White House is accusing the leader Wednesday of seeking to "marginalize Arab-Israeli citizens."

Marginalizing Arabs? Israel is the only place in the Middle East where Jews, Christians and Muslim Arabs live together in peace. Further, the vast majority of the Middle East is consumed by Arab countries that are hostile to Israel. In fact, every single Arab country surrounding the Jewish State has waged war against it at some point during its short history.

"All the Palestinians have ever had to do is recognize Israel as a Jewish State and promise to live in peace with it."


To make matters worse, POLITICO reports the Obama administration is reconsidering U.S. support for Israel at the United Nations, which over the decades has been extremely hostile to the Jewish State while upholding violent regimes like Iran.

In the wake of Israeli Prime Minister Benjamin Netanyahu’s decisive reelection, the Obama administration is revisiting longtime assumptions about America’s role as a shield for Israel against international pressure.

Angered by Netanyahu’s hard-line platform toward the Palestinians, top Obama officials would not rule out the possibility of a change in American posture at the United Nations, where the U.S. has historically fended off resolutions hostile to Israel.

“We are signaling that if the Israeli government’s position is no longer to pursue a Palestinian state, we’re going to have to broaden the spectrum of options we pursue going forward,” the official said.

The Obama administration continues talks with the Iranians over a nuclear deal and continues to distance itself from the only peaceful, true democracy in the Middle East. What could possibly go wrong?