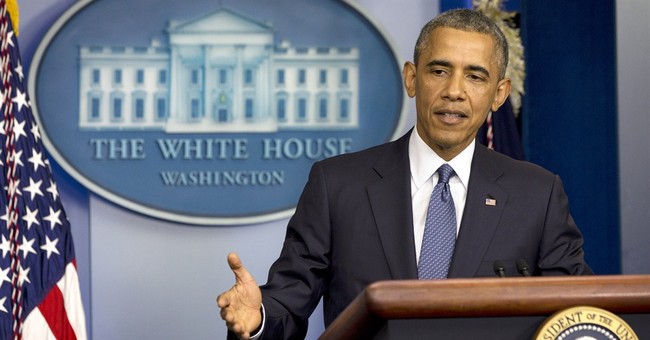 In 2008 then Senator Obama campaigned on the promise of ending the war in Iraq and bringing combat troops home. In 2012, Obama touted that promise as complete (one of the only campaign promises he actually kept) and critics warned leaving Iraq without a residual U.S. force would result in a power vacuum and vulnerable state. Now as the country falls apart and the radical Islamic State army continues its march unchallenged in Iraq, Obama is claiming he wasn't the one who made the decision to pull U.S. combat troops out of the country and that claims to the contrary are "bogus and wrong."

Q Mr. President, do you have any second thoughts about pulling all ground troops out of Iraq? And does it give you pause as the U.S. -- is it doing the same thing in Afghanistan?

THE PRESIDENT: What I just find interesting is the degree to which this issue keeps on coming up, as if this was my decision. Under the previous administration, we had turned over the country to a sovereign, democratically elected Iraqi government. In order for us to maintain troops in Iraq, we needed the invitation of the Iraqi government and we needed assurances that our personnel would be immune from prosecution if, for example, they were protecting themselves and ended up getting in a firefight with Iraqis, that they wouldn’t be hauled before an Iraqi judicial system.

And the Iraqi government, based on its political considerations, in part because Iraqis were tired of a U.S. occupation, declined to provide us those assurances. And on that basis, we left. We had offered to leave additional troops. So when you hear people say, do you regret, Mr. President, not leaving more troops, that presupposes that I would have overridden this sovereign government that we had turned the keys back over to and said, you know what, you’re democratic, you’re sovereign, except if I decide that it’s good for you to keep 10,000 or 15,000 or 25,000 Marines in your country, you don’t have a choice -- which would have kind of run contrary to the entire argument we were making about turning over the country back to Iraqis, an argument not just made by me, but made by the previous administration.

So let’s just be clear: The reason that we did not have a follow-on force in Iraq was because the Iraqis were -- a majority of Iraqis did not want U.S. troops there, and politically they could not pass the kind of laws that would be required to protect our troops in Iraq.

Having said all that, if in fact the Iraqi government behaved the way it did over the last five, six years, where it failed to pass legislation that would reincorporate Sunnis and give them a sense of ownership; if it had targeted certain Sunni leaders and jailed them; if it had alienated some of the Sunni tribes that we had brought back in during the so-called Awakening that helped us turn the tide in 2006 -- if they had done all those things and we had had troops there, the country wouldn’t be holding together either. The only difference would be we’d have a bunch of troops on the ground that would be vulnerable. And however many troops we had, we would have to now be reinforcing, I’d have to be protecting them, and we’d have a much bigger job. And probably, we would end up having to go up again in terms of the number of grounds troops to make sure that those forces were not vulnerable.

So that entire analysis is bogus and is wrong. But it gets frequently peddled around here by folks who oftentimes are trying to defend previous policies that they themselves made.

Right, pulling all U.S. troops from Iraq had nothing to do with Obama's political aspirations and promises. Pretty incredible. On the issue of Obama claiming the Iraqi's and Maliki "not wanting U.S. troops there," and "wouldn't agree to a status of forces agreement," Obama hardly tried to get an agreement done in the first place. Obama took the easy way out on the agreement in order to fulfill a campaign promise and to satisfy his base.

Here's a flashback from 2010, when Obama took credit for the troop pull-out in Iraq.

Weird.. He took credit for that decision in an Oval Office address in 2010. pic.twitter.com/L5v5Z40G4F

But, the idea that Obama had anything to do with the troop pullout is totally bogus right?
And another from 2011:

Obama today: "As if this was my decision." Obama in Oct 2011: pic.twitter.com/fnTQSKxt7N A promise he kept, and he's running from it? #OwnIt


You get the point.

President Obama wants to be responsible for what makes him look good in a short term moment and conveniently shoves off the bad and real decision making on everything and everyone else.