Rocker Bono Thanks America for Good Deeds in Africa 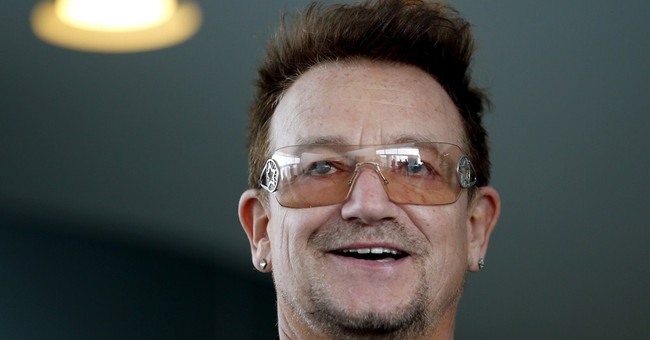 It isn't often we hear celebrities thanking America for her work around the world, which is why rocker Bono's open and grateful attitude is a breathe of fresh air.

Late last year, Ireland native Bono told an audience during a conference in Dublin that foreign aid isn't the answer and that commerce and capitalism are the only true ways to change the economies of struggling countries around the world and in return, improve the lives of the people living there.

“Job creators and innovators are just the key, and aid is just a bridge,” he told an audience of 200 leading technology entrepreneurs and investors at the Founders tech conference in Dublin. “We see it as startup money, investment in new countries. A humbling thing was to learn the role of commerce.”

Bono is the co-founder of ONE, an organization dedication to fighting poverty in Africa and he's thanking America for saving lives and dedicating resources to AIDs research.

"It's amazing to be able to say this — we are actually at the tipping point if we keep up the pressure. We are within reach of declaring the first AIDS-free generation. What a thought. What a thought for this community," He said. "And it's down to the activism of this generation, actors, directors, producers, musicians, but also students, doctors, nurses, priests, NASCAR drivers, soccer moms, CEOs, NGOs, politicians, people who just don't normally hang out together not just hanging out together but working together. And that's what it takes."

"Our one simple belief is that where you live should not decide whether you live. Now our leader in this campaign lost a son to the disease. His name was Nelson Mandela, the greatest activist of them all... His cleverness was to put aside tribalism and partisanship, the kind of partisanship, I think you'll agree, that has betrayed this great nation and the great American idea at the heart of it, even in the last couple of years," he continued. "It's ironic that by following an African's example, American and European AIDS activists like ONE were successful in encouraging Democrats and Republicans here in the U.S. to put aside their differences and work together on what is turning out to be the largest health intervention in the history of medicine. Thank you, America."


You know who else deserves a load of credit for this success? George W. Bush. During his tenure, President Bush gave more support and resources to AIDs research efforts in Africa than any President in American history, and yes, that includes President Barack Obama.
Biden's Performance with Hispanics Continues to Look Grim
Rebecca Downs
Further Proof BLM Is a Scam
Sarah Arnold
EXCLUSIVE: Casey DeSantis Receives Humanitarian Award at House of Hope
Rebecca Downs
BREAKING: Title 42 Is Staying at the Border for Now
Julio Rosas
Sen. Ted Cruz Calls Out Google For Sending GOP Emails to Spam
Sarah Arnold
President Biden Reaches Lowest Approval Rating of His Presidency, and the Reason Why May Surprise You