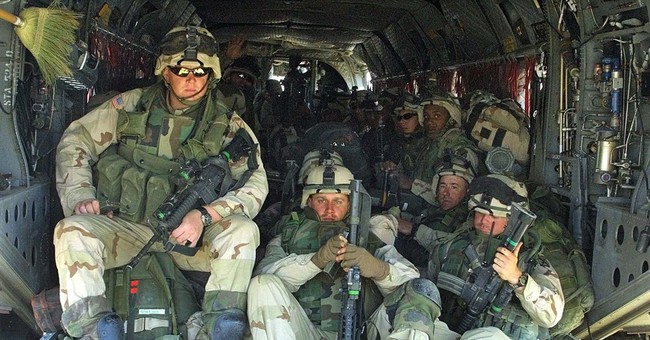 During a hearing in front of the House Foreign Relations Committee Thursday, Secretary of State John Kerry suggested the United States would eventually need to put boots on the ground in Syria in order to secure stockpiles of chemical weapons. When pressed on the issue, Kerry quickly walked back the troops on the ground option and stated he was simply "thinking out loud" when he made the statement. A resolution passed by the Senate Armed Service Committee yesterday, leaving wiggle room for troops to be eventually placed on the ground in Syria.

Now, the Daily Mail is reporting the Pentagon knew a year ago that in order to effectively secure chemical weapons, at least 75,000 ground troops would need to be deployed.

Securing Syria's chemical weapons stockpiles and the facilities that produced them would likely require the U.S. to send more than 75,000 ground troops into the Middle Eastern country, MailOnline learned Wednesday.

That estimate comes from a secret memorandum the U.S. Department of Defense prepared for President Obama in early 2012.

U.S. Central Command arrived at the figure of 75,000 ground troops as part of a written series of military options for dealing with Bashar al-Assad more than 18 months ago, long before the U.S. confirmed internally that the Syrian dictator was using the weapons against rebel factions within his borders.

'The report exists, and it was prepared at the request of the National Security Advisor's staff,' a Department of Defense official with knowledge of the inquiry told MailOnline Wednesday on condition of anonymity.

'DoD spent lots of time and resources on it. Everyone understood that this wasn't a pointless exercise, and that eventually we would be tasked with going and getting the VX and sarin, so there was lots of due diligence.'

So, what exactly is going to happen? President Obama has clearly indicated he's interested in a minor strike against Syria with no plan B should Bashir al-Assad be taken out of power. Senator John McCain wants to arm rebels in order to shift power away from Assad on the battlefield. Secretary of State John Kerry wants troops on the ground because realistically, that's the only way intervening in the civil war will be at least somewhat effective. He also wants the Saudis to bank roll for the whole thing.

The American people don't want intervention at all according to multiple polls.

The question now is this: What is the goal of the United States? To secure chemical weapons or to destroy them.