Kerry on U.S. Military Intervention in Syria: Some Arab Nations Have Offered to "Carry [the] Cost" 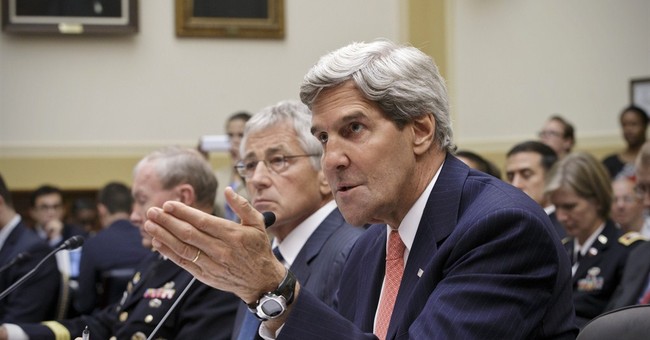 Secretary of State John Kerry revealed that Arab countries were offering to bear all the financial costs of unseating President Assad if the United States took the lead on military action during Wednesday’s House hearing on the Obama Administration’s proposal for Syrian intervention.

The hearing, held by the House Committee of Foreign Relations, hosted Secretary of State John Kerry, Secretary of Defense Chuck Hagel, and Chairman of the Joint Chiefs of Staff General Martin Dempsey to provide testimony on the Administration’s proposed resolution to use military force against the Assad Regime for its use of chemical weapons against Syrian civilians.

The House’s hearing come the just one day after the Senate Foreign Relations committee held their own hearing with the Secretaries and General.

The Chairman of the committee, Congressman Ed Royce, called upon Congressman Engel to deliver his opening statement. Engel sponsored the 2003 Syria Accountability Act, which stated that Syria’s use of weapons of mass destruction would be a direct threat to U.S. national security interests; he also sponsored the “Free Syria Act of 2013” that would have “(authorized) the President to provide lethal and non-lethal weapons to the moderate (Syrian) opposition.”

Engel called on the House to support the President’s push for a ‘limited’ strike against Syria for its direct violation of the Chemical Weapons Convention:

“We should not give the president a blank check…any strike should be of a limited nature, and that there should absolutely be no American boots on the ground in Syria.”

Engel reminded the committee that the crisis in Syria is an “ongoing humanitarian crisis,” and the goal is to “find a path forward that brings a lasting peace for the Syrian people.”

Secretary Kerry, Secretary Hagel and General Dempsey reiterated almost verbatim their testimonies from the Senate hearing, making a point to emphasize certain elements of their proposals that came under fire from Senators the day before.

Secretary Kerry reiterated his sentiments from the night before concerning the United States’ credibility in the eyes of its allies and enemies.

Kerry reinforced his absolute certainty that the Assad regime was responsible for the use of chemical weapons against Syrian rebels and civilians, and suggested that more information regarding the attack on August 21st, provided by “friends of Syria” would be released soon. He went on to assert that Assad’s conscious overstep of the President’s “red line” was a direct threat to U.S. national security:

“Only the most willful desire to avoid reality, only the most devious political purpose could assert that this did not occur. It did happen, and the Bashar al-Assad Regime did it.”

”This is about the world’s red line, this is about humanity’s red line…this is also about Congress’ red line…Congress passed the Syria Accountability Act,” he reminded the committee.

He urged Congress to avoid “consent through silence…Syria is important to America and our security.”

The Secretary made an obvious effort to clarify his statements from the Senate hearing, when he suggested that he “[didn’t] want to take off the table an option…to secure our country” by putting U.S. military troops on the ground in Syria. He alluded to a new draft of the resolution formed by the Senate that strongly prohibited the use of military forces on the ground.

“We are not asking America to go to war. (Secretary Hagel and General Dempsey) know the difference between going to war and what the President is asking for. We all agree there will be no American boots on the ground. We have no intention of assuming responsibility for Assad’s civil war; that is not in [the] cards.”

Defense Secretary Hagel also shared a similar testimony to the one he delivered during the Senate hearing; notably, he emphasized the increased threat on U.S. national security if terrorist organizations linked with the Syrian regime were able to gain access to chemical weapons:

“If Assad is prepared to use chemical weapons against his own people, we have to be concerned that terrorist groups like Hezbollah…could acquire them and use them.”

“We cannot afford for any terrorist group with interest to strike to U.S….to acquire nuclear weapons.”

General Dempsey only provided a few comments in his statement, but made it clear—to the distraught of many Representatives—that “militarily, the broader the resolutions, the more options [he] can provide.”

While many of the House members were quick to condemn the use of chemical weapons and sympathized with the victims, the Secretaries and General met ample criticism and skepticism from House members who raised a variety of concerns about the looming attack, from potential military repercussions to the costs that will be put on the American taxpayer.

Secretary Kerry was asked by various Representatives, most noticeably Congressman Wilson, why there was no military response in April, 2013 when the Assad regime used chemical weapons against the Syrian people. Wilson went on to ask if the proposed resolution was “a diversion” from the scandals that have plagued Washington over the summer, including the NSA surveillance of American citizens, the IRS’ targeting of conservative groups, the new revelations regarding the attack on the Benghazi consulate, and the ineffectual implementation of Obamacare provisions.

The Secretary explained that the President felt the previous attacks “merited an increase of assistance” to the opposition, but did not explain what criteria was used to determine why the attack on August 21st was one that specifically deserved a military response.

Congressman Poe asked General Dempsey to comment on the Administration’s plan if Assad and his allies “shoot back at Americans” after the U.S. carries out its military strike. Dempsey could not guarantee that there would be no push-back from the regime, but cited, “the contribution we will seek from others begins to eliminate that risk”; however, the General did not give examples of other nations that would be asked to support the United States if the crisis were to escalate.

Congressman Higgans painted a different picture of the Syrian conflict -- one that portrayed the conflict as a fight between a “brutal dictator” and “Islamic affiliates,” that left the United States with “no good military options,” and very little reason to become involved in the region.

“This is nothing more than a fight for control between two sectarian factions.”

“There is no democracy movement in Syria.”

The biggest surprise came late into the hearing, when Secretary Kerry revealed that Arab countries have offered to burden the financial costs of unseating President Assad if the United States handles the military action. This information contracts his previous statements that assured discussions of escalating military action in Syria were off limits:

“In fact, some of them have said that if the United States is prepared to go do the whole thing the way we’ve done it previously in other places, they’ll carry that cost,” Kerry said.

“That’s how dedicated they are at this. That’s not in the cards, and nobody’s talking about it, but they’re talking in serious ways about getting this done.”

Though the Secretaries and General tried to clarify the “limited” and “narrow” scope of the planned military attack against Syria, Kerry’s references to hypothetical plans involving military action and direct involvement in the civil war may have further blurred the lines concerning the Administration’s real purpose for Syrian intervention. When Congress reconvenes on September 9th, supporters and skeptics on both side of the aisle will debate what goals in Syria, if any, are linked directly the U.S. national interest; they will also determine if they trust the Administration to faithfully execute their decision.
Atlanta Mayor Breaks From the Dem Pack and Denounces Riots In Her City
Beth Baumann
Why Trump Blasted the DC Mayor for the Riots Outside the White House
Beth Baumann
With Roberts' Vote, SCOTUS Shoots Down Challenge on Church Services Limits During Coronavirus Lockdown
Matt Vespa