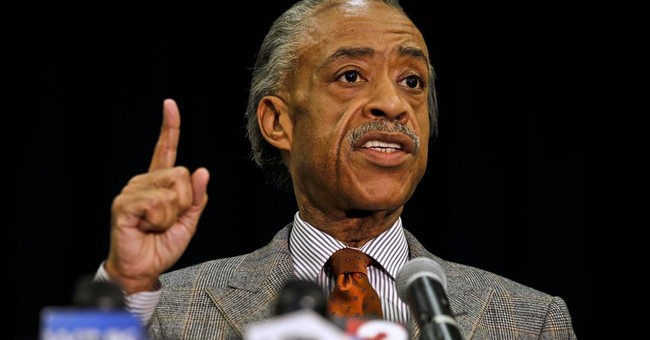 It's becoming clearer every year that the only thing keeping Al Sharpton relevant is Al Sharpton making up bogus claims of racism. Despite George Zimmerman being acquitted on murder and manslaughter charges by a jury of his peers and despite zero evidence in his trial showing racial bias, Sharpton is planning protests in 100 cities this weekend.


The Rev. Al Sharpton is calling for a “Justice for Trayvon National Day of Action” on Saturday and say demonstrations are planned in more than 100 cities nationwide.

Saying there would not have been a trial in Florida without pressure from activists, Sharpton was confident that continued pressure would result in a federal civil rights case.

“When they’re telling you today, ‘I don’t know if they’re going to get a civil rights trial:’ We will. And we will get a civil trial,” Sharpton said on the “Tom Joyner Morning Show” on Monday morning. “What we’ve watched the last several weeks was not the system correcting itself, it was the people correcting the system. Now we’ve got to finish the job.”

National Action Network is organizing the protests at federal court buildings to press the Justice Department to bring a civil rights case against George Zimmerman, who was found not guilty in the death of teenager Trayvon Martin by a Florida jury on Saturday.

Sharpton said his National Action Network intends to keep the pressure on until a civil rights case is brought, insisting the protests will show the national anger over the verdict is not a “two- or three-day” thing.

The most pathetic thing about this is, whenever the NAACP or Al Sharpton says "jump," the Department of Justice asks, "How high?" Over the weekend the DOJ, headed by Attorney General Eric Holder (who literally carries a race card in his wallet), confirmed an investigation into whether George Zimmerman violated the civil rights of Trayvon Martin. One big problem with that: The FBI cleared Zimmerman of any racial bias last year.

The FBI has been probing the handling of Martin's death for any civil rights violations, but the agency hasn't released any findings.

The bottom line is, Sharpton is a dishonest coward who depends on his own race baiting to make a living.

The continued prominence of Al Sharpton is one of the wonders of the world. Simply amazing.